States of Matter - The Liquid State At normal conditions of temperature, pressure, and volume liquids generally, show the above-mentioned features. When the physical conditions change the basic characters of liquids also undergo a drastic change. Apart from the above characteristics, liquids also show the following properties: 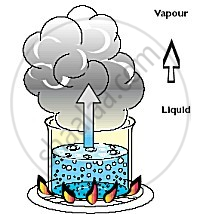 When a liquid is filled in a container, its walls are occupied by the vapors from that liquid. Liquids show the unique property of turning into vapors, as soon as the temperature rises! Generally, vapors from the aqueous substance occupy the walls of the unfilled part of the container and exert a pressure on the walls of that container, this pressure is called the vapor pressure.