The ultrasound waves are the sound waves with high frequency. Due to this, they can travel long distances despite any obstacles between their paths.

This device is used to find the distance, direction and speed of objects that are present under the water. It uses Ultrasonic waves to do so.

Bats generate Ultrasonic waves. As these waves hit an object, they get reflected back to the bat’s ears. The bats can understand the nature of reflection of these waves and then can decide the position of the object over their prey. 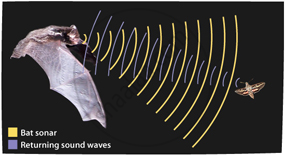 Explain how does SONAR work?