Principle: In the case of immiscible liquids, heavier liquid settle at the bottom, and the lighter liquid floats on the top. In separating funnel, immiscible liquids form separate layers after some time which can be filtered out one by one. 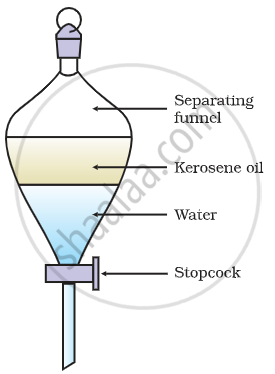 Observation: A layer of kerosene is formed above that of water.

Inference/ Result: Water, being heavier will sink at the bottom and the opening of the stopcock will release it from the separating funnel.