Thomson’s model of an atom:

(i) An atom consists of a positively charged sphere and the electrons are embedded in it.

(ii) The negative and positive charges are equal in magnitude. So, the atom as a whole is electrically neutral. 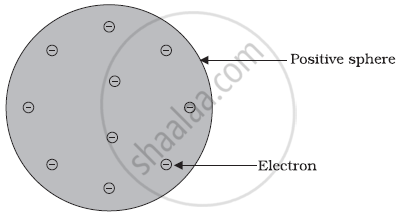 Although Thomson’s model explained that atoms are electrically neutral, the results of experiments carried out by other scientists could not be explained by this model.