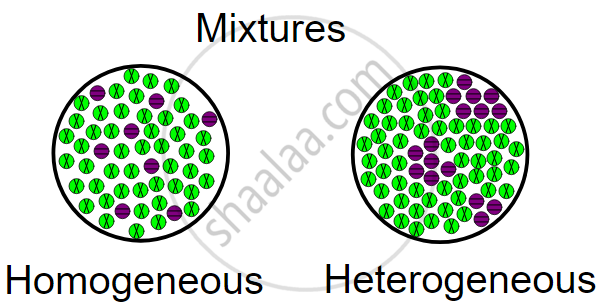 Then is air homogeneous or heterogeneous?

It is homogeneous because as its constituents quickly mix in with the other constituents to become uniform (clearly, we do not see different layers of its components)

List the points of differences between homogeneous and heterogeneous mixtures with examples.

A few drops of ‘Dettol’ when added to water the mixture turns turbid. Why?

What is meant by a pure substance?

A mixture of sulphur and carbon disulphide is :

Which separation techniques will you apply for the separation of the Tea leaves from tea.

Differentiate between homogeneous and heterogeneous mixtures with examples.

How would you separate a mixture of sugar and salt?

How will you separate a mixture of sodium chloride and sand ?

How will you separate a mixture of cooking oil (groundnut oil) and water ?