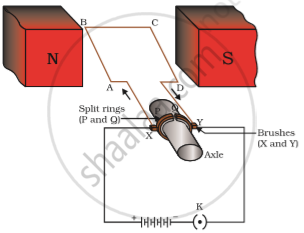 -An electric motor consists of a rectangular coil ABCD of insulated copper wire. The coil is placed between the two poles of a magnetic field such that the arm AB and CD are perpendicular to the direction of the magnetic field

-The ends of the coil are connected to the two halves P and Q of a split ring. The inner sides of these halves are insulated and attached to an axle. The external conducting edges of P and Q touch two conducting stationary brushes X and Y, respectively

-Current in the coil ABCD enters from the source battery through conducting brush X and flows back to the battery through brush Y. Notice that the current in arm AB of the coil flows from A to B. In arm CD it flows from C to D, that is, opposite to the direction of current through arm AB.

-We find that the force acting on arm AB pushes it downwards while the force acting on arm CD pushes it upwards. Thus the coil and the axle O, mounted free to turn about an axis, rotate anti-clockwise. At half rotation, Q makes contact with the brush X and P with brush Y. Therefore the current in the coil gets reversed and flows along the path DCBA

-The commercial motors use

(i) an electromagnet in place of permanent magnet

to keep track of your progress.
Magnetic Effects of Current part 10 (Electric motors) [00:14:42]
S
to track your progress

What is an electric motor?

State whether true or false. If false, correct the statement.

Name any four appliances where electric motor is used.

Label the four parts of an electric motor

Explain the construction and working of an electric motor.

Which device is used to produce electricity? Describe with a neat diagram.