In our homes, we receive supply of electric power through a main supply (also called mains), either supported through overhead electric poles or by underground cables.

One of the wires in this supply, usually with red insulation cover, is called live wire (or positive). Another wire, with black insulation, is called neutral wire (or negative).

In our country, the potential difference between the two is 220 V.

-At the meter-board in the house, these wires pass into an electricity meter through a main fuse.

-Through the main switch they are connected to the line wires in the house.

-These wires supply electricity to separate circuits within the house.

-One of 15 A current rating for appliances with higher power ratings such as geysers, air coolers, etc.

-The other circuit is of 5 A current rating for bulbs, fans, etc.

-The earth wire, which has insulation of green colour, is usually connected to a metal plate deep in the earth near the house.

-This is used as a safety measure, especially for those appliances that have a metallic body, for example, electric press, toaster, table fan, refrigerator, etc.

-The metallic body is connected to the earth wire, which provides a low-resistance conducting path for the current.

-Thus, it ensures that any leakage of current to the metallic body of the appliance keeps its potential to that of the earth, and the user may not get a severe electric shock.

to keep track of your progress.
Magnetic Effects of Current part 13 (Domestic & Circuit) [00:06:49]
S
to track your progress

Identify the following wires used in a household circuit: The wire is connected to the top terminal of a three pin socket.

In following Figure shows two bulbs with switches and fuse connected to mains through a socket.
label each component

1) if the iron is used for 2h daily find the cost of running it for one week if it costs 4.25 per kWh

2) Why is the fuse absolutely necessary in a power circuit?

Fig 9.15 shows two ways (a) and (b) of connecting the three lamps A, B and C to a.c. supply of 220 V. Name the two arrangements. Which of them would you prefer in a household circuit? Give reason for your answer. 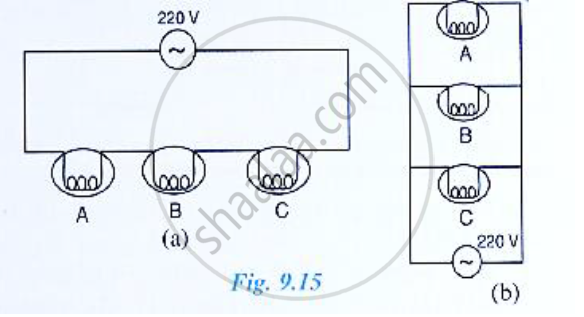 The rating of a fuse connected in the lighting circuit is :

(a) Name the three connecting wires used in a household circuit
(b) Which of the two wires mentioned in part (a) are at the same potential?
(c) In which of the wire stated in part (a) the switch is connected?

Identify the following wires used in a household circuit: The wire is also called as the phase wire.

State the function of the following in a house circuiting
kWh meter .