acids. 5-8% solution of acetic acid in water is called vinegar and is used widely as a preservative in pickles.

The melting point of pure ethanoic acid is 290 K and hence it often freezes during winter in cold climates. Hence known as glacial acetic acid.

Esters are most commonly formed by reaction of an acid and an alcohol. Ethanoic acid reacts with absolute ethanol in the presence of an acid catalyst to give an ester –

Generally, esters are sweet-smelling substances. These are used in making perfumes and as flavouring agents. On treating with sodium hydroxide, which is an alkali, the ester is converted back to alcohol and sodium salt of carboxylic acid. This reaction is known as saponification because it is used in the preparation of soap.

(ii) Reaction with a base:

Like mineral acids, ethanoic acid reacts with a base such as sodium hydroxide to give a salt (sodium ethanoate or commonly called sodium acetate) and water.

(iii) Reaction with carbonates and hydrogencarbonates:

Ethanoic acid reacts with carbonates and hydrogencarbonates to give rise to a salt, carbon dioxide and water. The salt produced is commonly called sodium acetate.

to keep track of your progress.
Carbon and Compounds part 26 (Ethanoic Acid) [00:06:42]
S
to track your progress

Choose the correct alternative and rewrite the following:

Choose the correct alternative and rewrite the following:

Rewrite the following statement by selecting the correct option.
The formula of ethanoic acid is _____________.

Write the answers to the questions by observing the following figure. 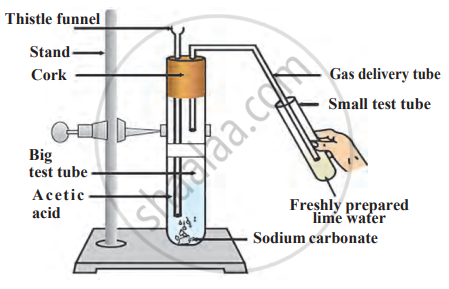