Lens is an optical device which converges or diverges the rays of light before transmitting. A lens has similar shape to lentils and genus of lentil is called Lens, thus a lens got its name after the shape and name of genus of lentils. A lens is made by combining at least one part of sphere made of transparent material, generally glass.

Spherical Lens: Most of the lenses are made by the combination of parts of transparent sphere. Concave and Convex lens are most commonly use spherical lens.

Convex lens is the most commonly used lens in our day to day life. 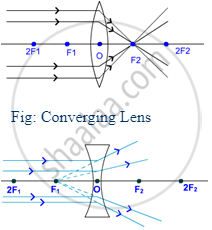 Similar to centres of curvature; convex and concave lenses have two Foci. These are represented as F1 and F2.

Principal Axis: Imaginary line that passes through the centres of curvature of a lens is called Principal Focus.

Optical centre: The central point of a lens is called its Optical Centre. A ray passes through optical centre of a lens without any deviation.

This is the cause that the centre of curvature is generally denoted by 2F for a lens instead of C.

Reflection is one of the unique properties of light. It is the reflection of light, which enables us to see any object.

(ii) The incident ray, the normal to the mirror at the point of incidence and the reflected ray, all lie in the same plane.

Mirror is a shiny polished object (glass) which reflects most of the rays of light falling upon it. One side of mirror is polished with suitable material to make the other side reflective.

Real Image: Image which is formed in front of the mirror and it can be obtained on a screen is called real image.

Virtual Image: Image which is formed behind the mirror and cannot be obtained on a screen is called virtual image. 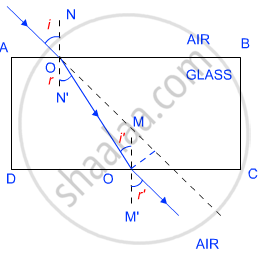 to keep track of your progress.
Light Reflection and Refraction part 1 (Introduction) [00:05:07]
S
to track your progress

State the Snell’s laws of refraction of light.

A light ray suffers reflection and refraction at the boundary in passing from air to water. Draw a neat labelled ray diagram to show it.