Faraday made an important breakthrough by discovering how a moving magnet can be used to generate electric currents.

The mutually perpendicular directions also point to an important fact that the when the magnetic field and movement of conductor are perpendicular, the magnitude of induced current would be maximum.

Electromagnetic induction is used in the conversion of kinetic energy into electrical energy.

The direction of the induced current can be  identified by Flemings right hand rule. 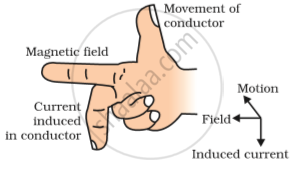 -In India, the AC changes direction after every 1/100 second, that is, the frequency of AC is 50 Hz.

-An important advantage of AC over DC is that electric power can be transmitted over long distances without much loss of energy.

to keep track of your progress.
Electromagnetic Induction part 1 (Introduction) [00:03:04]
S
to track your progress

State the condition at which we say the two coils kept close to each other are perfectly coupled with each other.

A metal rod `1/sqrtpi `m long rotates about one of its ends perpendicular to a plane whose magnetic induction is 4 x 10-3 T. Calculate the number of revolutions made by the rod per second if the e.m.f. induced between the ends of the rod is 16 mV.

If ‘R’ is the radius of dees and ‘B’ be the magnetic field of induction in which positive charges (q) of mass (m) escape from the cyclotron, then its maximum speed (vmax) is _______.