Components of an ecosystem:

Consumers: These organisms which consume the food produced, either directly from producers or indirectly by feeding on other consumers are known as consumers.

They are classified as:

Omnivores: An animal or a person that feeds on both plant and animal origin is known as an omnivore. e.g. Humans, pigs, bears, chickens, etc.

Parasites: An organism that lives in or on an organism of another species (its host) and benefits by deriving nutrients at the other's expense. e.g. Tapeworm, fleas, etc.

Producers: The organisms that can make organic compounds like sugar and starch from inorganic substances using the radiant energy of the Sun in the presence of chlorophyll are called as producers. e.g. All green plants and certain bacteria. -Each step or level of the food chain forms a tropic level.

-The autotrophs or the producers are at the first tropic level. They fix up the solar energy and make it available for heterotrophs or the consumers.

-The herbivores or the primary consumers come at the second place

-Small carnivores or the secondary consumers at the third place

-The green plants in a terrestrial ecosystem capture about 1% of the energy of sunlight that falls on their leaves and convert it into food energy.

-When green plants are eaten by primary consumers, a great deal of energy is lost as heat to the environment, some amount goes into digestion and in doing work and the rest goes towards growth and reproduction. An average of 10% of the food eaten is turned into its own body and made available for the next level of consumers.

-Therefore, 10% can be taken as the average value for the amount of organic matter that is present at each step and reaches the next level of consumers.

-Since so little energy is available for the next level of consumers, food chains generally consist of only three or four steps. The loss of energy at each step is so great that very little usable energy remains after four tropic levels.

- There are generally a greater number of individuals at the lower tropic levels of an ecosystem, the greatest number is of the producers.

-The length and complexity of food chains vary greatly. Each organism is generally eaten by two or more other kinds of organisms which in turn are eaten by several other organisms. So instead of a straight line food chain, the relationship can be shown as a series of branching lines called a food web. 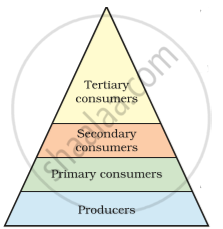 -Firstly, the flow of energy is unidirectional. The energy that is captured by the autotrophs does not revert back to the solar input and the energy which passes to the herbivores does not come back to autotrophs.

-As it moves progressively through the various tropic levels it is no longer available to the previous level.

-Secondly, the energy available at each tropic level gets diminished progressively due to loss of energy at each level. -Organisms that lie at the very top of the food chain are known as ‘Apex Consumers’.

The interlinking of feeding relationships of various communities of organisms is known as the ‘Food web’.