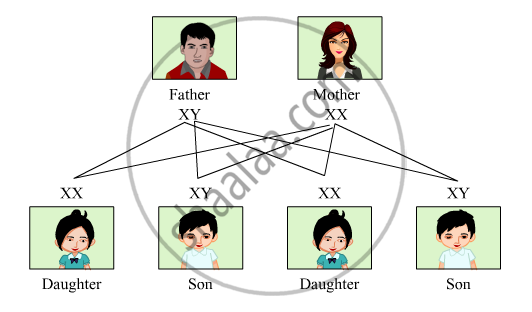 -In some animals, the temperature at which the fertilized eggs are kept decides the gender. Example: turtle.

-In humans gender of an individual is determined by a pair of chromosomes known as sex chromosome.

-All the off springs will inherit the X chromosomes from the mother regardless of the gender.

- Thus sex of an individual is determined by what they inherit from their father, and not their mother.

Differentiate between male and female heterogamety

What is heterogamety ? Explain the mechanism of sex determinatin in Drosophila.

Differentiate between 'ZZ' and 'XY' type of sex-determination mechanisms.

Write the types of sex-determination mechanisms the following crosses show. Give an example of each type.
(i) Female XX with Male XO
(ii) Female ZW with Male ZZ

Explain the mechanism of sex determination in birds.