Pascal’s law for transmission of fluid pressure states that the pressure exerted anywhere in a confined incompressible fluid is transmitted undiminished and equally in all directions throughout the fluid.

A number of devices, such as hydraulic lift and hydraulic brakes, are based on Pascal’s law. In these devices, fluids are used for transmitting pressure. In a hydraulic lift, as shown in Fig, two pistons are separated by the space filled with a liquid. A piston of small cross-section `"A"_1` is used to exert a force `"F"_1` directly on the liquid. The pressure `"P" = "F"_1/"A"_1` is transmitted throughout the liquid to the larger cylinder attached with a larger piston of area `"A"_2`, which results in an upward force of P × `"A"_2`. Therefore, the piston is capable of supporting a large force (large weight of, say a car or a truck placed on the platform `"F"_2 = "PA"_2 = "F"_1/"A"_1"A"_2`. By changing the force at `"A"_1` the platform can be moved up or down. Thus the applied force can be increased by a factor of `"A"_2/"A"_1` and this factor is the mechanical advantage of the device. 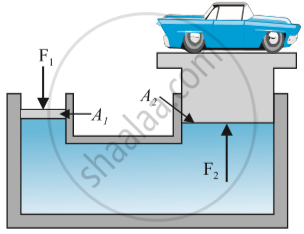 Hydraulic brakes work on the principle of Pascal’s law.

A hydraulic automobile lift is designed to lift cars with a maximum mass of 3000 kg. The area of cross-section of the piston carrying the load is 425 cm2. What maximum pressure would the smaller piston have to bear?

A cubical block of density ρ is floating on the surface of water. Out of its height L, fraction x is submerged in water. The vessel is in an elevator accelerating upward with acceleration a . What is the fraction immersed?