Work Done by a Constant Force and a Variable Force 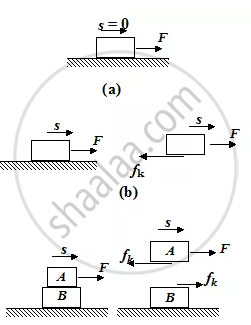 Consider a block of mass m which slides down a smooth inclined plane of angle θ.
Let us assume the coordinate axes as shown in the figure, to specify the components of the two vectors, although the value of work will not depend on the orientation of the axes.
Now, the force of gravity, `bar F g= −mg hat j` and the displacement is given by
`bar S = Δx hat i + Δy hat j + Δz hat k`

If the block moves in the upward direction, then the work done by gravity is negative and is given by
Wg = - mgh

Application 3
A block of mass 10 kg is to be raised from the bottom to the top of incline 5m long and 3m off the ground at the top. Assuming frictionless surface, how much work is done by a force parallel to the incline pushing the block up at constant speed. (g = 10 m/s2) 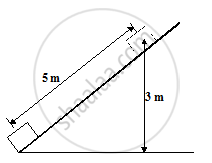 Solution:
Here, we must first find the force with which the block must be pushed. We begin by drawing a F.B.D. of the block.
Here,
F = Applied force
mg = weight of the block
N = Normal reaction by the incline on the block. 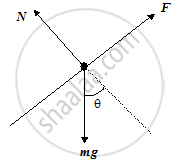 If a person were to raise the block vertically without using the incline, the work he would do would be the vertical force mg times the vertical distance
or (10 ×10 N) × (3m) = 300 J, the same as before.
The only difference is that with the incline he could do the job with a smaller force i.e. 60 N but he has to push the block a greater distance i.e. 5 m up the incline than he had to raise the block directly (3m).
This application also illustrates the point that machines (simple or complex) can not save the amount of work that has to be done to accomplish a job, they merely allow us to do the job with less effort.

Work done by a variable force