Several plans for rural development have been implemented so that the rural sector should not get neglected and the balance between rural and urban development be maintained. The plans that are being implemented in the present are mostly augmentation of plans that were already operational. Sometimes earlier plans were merged in new plans.

To create employment opportunities for an ever-increasing population is a major challenge for the government.

To create job opportunities for educated youth the ‘Ministry of Commerce and Industry’ of the Government of India started a plan on 2nd October 1993. This plan was meant for creating opportunities for job and private enterprise.

‘Pradhan Mantri Rojgar Yojana’ and ‘Rojgar Hami Yojana’ were started on the birth anniversary of Mahatma Gandhi. Rojgar Hami Yojana was to assure daily wages to the unemployed agricultural labourers. There are days when the employment of any kind is not available to agricultural labourers. The objective of this plan was to provide wage-earning opportunity, who were in search of it. Initially, this plan was launched in 257 districts in India. A goal was set to provide work to two young labourers in each family below the poverty line. In 2001 this plan was merged in ‘Gramin (Rural) Rojgar Yojana’.

In 1998, with a view to provide support to farmers in difficult times, ‘Kisan Credit Card’ plan was started. It was also intended to help the farmer to avail funds for essential equipment and seeds for cultivation. Later, an insurance facility was also offered to farmers, who were Kisan Credit Card holders.

In order to ensure the welfare of workers in the unorganized sector which, inter alia, include weavers, handloom workers, fishermen and fisherwomen, toddy tappers, leather workers, plantation labour, beedi workers, the ‘Unorganised Workers’ Social Security Act, 2008’ has been enacted. As per the provisions of the Act, a National Social Security Board has been constituted for recommending formulation of social security schemes viz. Life and disability cover, health and maternity benefits, old age protection and any other benefit as may be determined by the Government for unorganized workers.

This plan was launched in 1999. This plan was started by merging various plans together namely ‘Ekatmik Gramin Vikas Yojana’, Self-employment training programmes for rural youth, the programme for rural women and children, distribution of modern equipment to rural artisans, ‘Ganga Kalyan Yojana’ and plan to dig 10 lakh wells etc. In 2005-06, there were 12 lakh 7 thousand beneficiaries of ‘Suvarnajayanti Gramin Swayam Rojgar Yojana’.

In 1999, a new plan was implemented with an intention to provide adequate employment for unemployed men and women. In 2001, it was merged in a plan known as ‘Sampoorna Gramin Rojgar Yojana’.

This plan was launched by merging together ‘Rojgar Aashwasan Yojana’ and ‘Jawahar Gram-Samruddhi Yojana’. This plan made provisions for creating opportunities in rural areas of earning wages, to provide food- grains in exchange of work, etc. In 2004, the scheme of giving food-grains in exchange of work was started in 150 districts in the country which were economically most backward. Measures like water conservation, development of agricultural lands were given priority to overcome situations of famine. In 2006, this scheme was merged in ‘Rashtriya Gramin Rojgar Hami Yojana’.

The Government of India launched this scheme on a national level to eradicate economic disparity, poverty, starvation and unemployment in rural India. Each family in rural areas was given assurance of at least 100 days’ work. Till 2008, this scheme was started in about 350 districts.

Along with the nation’s transformation, the agricultural sector is also getting transformed. According to the 2011 census, 54% of the total population in India is engaged in agriculture and agro- related sector. The ‘Soil Health Card Scheme’ aims at increasing soil fertility and agricultural production. ‘Pradhan Mantri Krishi Sinchan Yojana’ envisaged is for giving priority to adequate water supply for agriculture and irrigation facilities on a larger scale. ‘Krishi Vikas Yojana’ aims at organic cultivation and increase in the farmers’ income. ‘Pradhan Mantri Vima Yojana’ is implemented for the economic welfare of the farmer. More emphasis is given on fields like animal husbandry, dairy, fisheries, agricultural research and education. Focus on developing ‘Agriculture’, ‘Co-operative establishments’ and ‘Farmer Welfare’ are the three main themes of the development programmes.

In 2007, a national policy for the farmer was adopted. Gradually, the results of all the programmes implemented for the agricultural sector are becoming apparent. If there is a crop failure, because of things like natural calamities, pesticides, epidemics, adverse climate, etc. the farmer gets compensated Agricultural Research through the insurance scheme (‘Pradhan Mantri Peek Vima Yojana’). Research institutes of agricultural science are supported through the Indian Council for Agricultural Research (I.C.A.R.). Agricultural exhibitions are organised with the objective of introducing the farmers to the latest technology, new agricultural experiments and research. Indigenous seeds and indigenous breed of cattle is given priority. Research programmes on ‘goat’ were conducted on the pan-Indian level. Goat keeping (Sheli Palan) is encouraged as an occupation for enhancing the living standard of tribal people. It has largely become their principal source of livelihood. In rural areas, poultry farming of indigenous variety was encouraged. Thus, India is making significant progress in the fields of animal husbandry, dairy and milk production, fisheries, livestock, poultry, meat and wool production. Ours is a leading country in milk production. The ‘National Livestock Mission’ was established in 2014-15 and since then there is rapid growth in the livestock sector. This mission provides for the availability of fodder, loan, organizing the cattle keepers and resolving their difficulties. In 1919-20, the first livestock census was conducted. Since then it is being done regularly. The ‘2012 Livestock Census’ was nineteenth in the series. China ranks first in fish production while India ranks second. Fishing has been an important occupation in India, which is now supplemented with fish farming (pisciculture). This sector is growing rapidly.

The Government of India, knowing the importance of having roads in good conditions in the interior areas, started ‘Pradhan Mantri Gram Sadak Yojana’ in 2000. Initially, the work of building roads began by linking the villages of population strength up to 1000. In 2001, this programme was merged in ‘Pradhan Mantri Gramoday Yojana’. The roads measuring about 75000 Km. were completed till 2005. The purpose of this work was to extend the benefits of country’s economic growth to people living in rural areas and to bring transformation in their lives. It aimed at providing amenities for good health, education, drinking water, dwellings, roads and electricity. 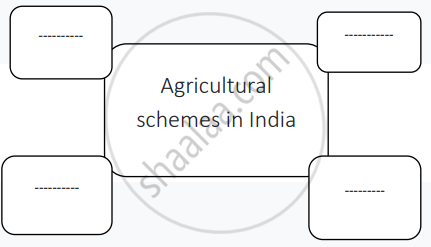 Soil Health Card Scheme is related to which sector.

Various schemes were implemented for the agricultural sector in India.

Which programmes were launched in India for making the opportunities of wage-earning?