Raja Ram Mohan Roy was born in Bengal. He translated Sanskrit Upanishads in Bengali. The experience of witnessing his brother’s wife immolating herself on her husband’s funeral pyre (she followed the custom of Sati), perturbed him very deeply. Roy published a letter about the evil practice of Sati. He was the first Indian to point out that none of the Indian religious texts mentioned the practice of Sati as a prescribed religious obligation. It is because of his efforts that a law was passed by the Governor-General Lord William Bentinck, abolishing the practice of Sati, in 1829. He was also opposed to the practice of child marriage and segregation of women (Purdah system). He opened an English medium school. He also launched the first weekly periodical in Bengali. Later, he also launched another publication in the Persian language. He also started a philosophical discussion circle, named ‘Atmiya Sabha’. This circle became a platform for searching similarities value systems of different religions. In 1828, he founded ‘Brahmo Samaj’ and proclaimed that ‘God is one and there is no need to worship idols to propitiate him’.

Raja Ram Mohan Roy spoke in support of the anti-colonial movements in the Spanish colonies in South America. He supported the liberal people in Spain who were against monarchical rule. In 1830, he had gone to England to plead the case of the Mughal emperor. In recognition of this, the Mughal emperor conferred the title of ‘Raja’ on him. He stayed in England for 2 years. Later, he went to France. In India, he unfolded Europe for the Indians, and similarly, whenever in Europe, he unfolded India to Europeans.

Roy, being trained in the British regime, laid the foundation of modernity in India through his writings and work. Organisations like ‘Manavdharm Sabha’, ‘Paramhamsa Sabha’ and ‘Dnyanprasar Sabha’ were inspired by his work.

Manav Dharma Sabha was one of the earliest socio-religious reform organization in Gujarat and British India. It was founded on 22 June 1844 in Surat by Durgaram Manchharam Mehta, Dadoba Pandurang Tarkhadkar, and a few others. The goals of the Sabha were to expose the hypocritical arts present in Christian, Muslim, and Hindu religions. It had a very short life span and ceased to exist as Dadoba left for Bombay in 1846 and Durgaram left for Rajkot in 1852.

The main objective of Manav Dharma Sabha was to highlight the positive side of true religion based on truth and morality. The organization accepted the concept of monotheism, a concept which belies in the existence of one God only. The organization used to organize public meetings every Sunday in which the speakers used to exhort to give up casteism, to encourage widow remarriages, and to stop the practice of idol worship. The main activity of the organization was to abolish superstitious beliefs from society and to ensure that people do not practice black magic, witchcraft, and other malpractices.

Paramahansa Mandali was a secret socio-religious group, established in 1849, in Bombay and is closely related to Manav Dharma Sabha which was found in 1844 in Surat. It was started by Durgaram Mehtaji, Dadoba Pandurang, and a group of his friends. Dadoba Pandurang assumed leadership of this organisation after he left Manav Dharma Sabha. He outlined his principles in Dharma Vivechan in 1848 for Manav Dharma Sabha and "Paramhansik Bramhyadharma" for Paramahansa Mandali. It acted as a secret society and is believed that the revelation of its existence in 1860 hastened its demise. It was the first socio-religious organization of Maharashtra. Founded in 1849 in Maharashtra, the founders of these Mandli believed in one god. They were primarily interested in breaking caste rules. At their meetings, food cooked by lower caste people was taken by the members. The mandali also advocated women's education and widow remarriage.

Raja Ram Mohan Roy wrote an English letter against the practice of Sati, because - ______ 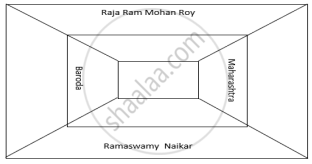 Explain the following statement with reasons:

Raja Ram Mohan Roy laid the foundation of modernity in India through his writings.

What reforms did Raja Ram Mohan Roy insist on?

What reforms did Raja Ram Mohan Roy insist on?