A super-computer named ‘Param-8000’ was created with the help of C-DAC (Centre for Development of Advanced Computing), Pune. In 1998, an advanced version of ‘Param-8000’ was made, which was named as ‘Param-10000’. Its mathematical potential was enormous, because of which India entered the global computer market. India won its place among the leading countries with the high technological know-how of computer making. In1999, a project of creating a still further version of ‘Param-10000’ was undertaken. This computer was named ‘Parampadma’. ‘Parampadma Super Computer’ was dedicated to the nation in 2003.

The Indian software industry was benefitted because of the policy of liberalisation. The Central Government’s favourable policies for the software industry, foresightedness of the Indian entrepreneurs, the nationwide spread of computer and information technology, computer engineers who are also proficient in the use of English language resulted in the tremendous increase in the Indian export of software. It increased from 3.2% to more than 25%.

In 1995, internet services began in the Indian metropolises. In 2004, Tata Consultancy was the biggest firm in Asia providing software services. Pune and Bengaluru developed as Information Technology (IT) hubs. The population in India using internet services is rapidly increasing. Indian IT engineers are in great demand all over the world.

In the field of science, India, to prove its nuclear strength, conducted underground nuclear tests two times at Pokharan in Rajasthan. The Indian satellite, ‘Oceansat-1’ launched and entered the orbit in 1999 to collect oceanographic information (about oceans and seacoasts). In 2000, ‘Bharat Sanchar Nigam Ltd., (BSNL) was established to provide services like cellular phones (mobile phones), internet, and broadband In 2007, India entered a new field of space research. It commercially launched the Italian satellite. Other nations had submitted tenders quoting very high rates, to get this contract. However, India got this contract by quoting reasonable rates. Nevertheless, India earned considerable profit through the Italian contract. Before entering this field on a commercial basis, India had already successfully launched the satellites of Argentina, Belgium, South Korea, Indonesia, and Germany. In 2008, India launched ‘Chandrayaan-1’, the first lunar probe. Through the information sent by ‘Chandrayaan-1’, India could collect evidence for the presence of water on the moon. After that India also launched ‘Chandrayaan-2’ and ‘Mangalyaan’.

Write the name of historical place/person/event.

In 2004, this became the biggest firm in Asia providing software services - 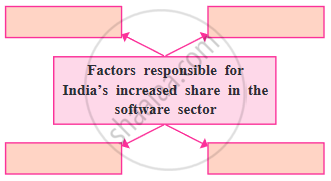 India is a leading country in the field of space research.

The Pokhran where the nuclear test was conducted is in the state.