The Italian traveler, Marco Polo, introduced China and other Asian countries to Europe. He stayed in China in the royal court of Kubalai Khan. There he studied Mongolian and Chinese languages. His travels are recorded in The Travels of Marco Polo a book that described to Europeans the then mysterious culture and inner workings of the Eastern world, including the wealth and great size of the Mongol Empire and China in the Yuan Dynasty giving their first comprehensive look into China, Persia, India, Japan, and other Asian cities and countries.

Ibn Battuta was a scholar and famous mediaeval traveler. Ibn Battuta visited India, Maldives, Sumatra, China, Spain, Sardinia, East, and West Africa for various reasons. He travelled more than any other explorer in distance, totaling around 117,000 km, surpassing Zheng He with about 50,000 km and Marco Polo with 12,000 km.

He was the prince of Portugal in the 15th century. He encouraged people to go on expeditions and search for lands, which were not known till then. These expeditions resulted in the discovery of ‘Madeira’ and ‘Azores’, two archipelagos near Africa. These two are autonomous regions of Portugal. The Portuguese began to transport African people to Portugal and sell them as slaves. African gold was also brought back to Portugal by these people.

Dias began his expedition on the orders of the King of Portugal, John II. He reached the southern tip of Africa, which he named as ‘Cape of Storms. Later, the name was changed to ‘Cape of Good Hope’. He was the first seafarer to circumnavigate the African continent.  He sailed around the southernmost tip of Africa in 1488, the first European to do so, setting up the route from Europe to Asia later on. Dias is the first European during the Age of Discovery to anchor at what is present-day South Africa.

In the year 1453 Istanbul (Constantinople), the capital city of the Eastern Roman (Byzantine) Empire was conquered by the Ottoman army. Thereafter it became the capital of the Ottoman Empire. Now the eastern sea route was closed for Europeans. It had become necessary for them to search for an alternative route to reach Asia. With the support of King Ferdinand and Queen Isabel of Spain, Christopher Columbus, an Italian explorer set sail in the search of India. He was certain that by sailing westwards, he would find India, as the earth is round. Instead of reaching India, he reached the islands near America.

Amerigo Vespucci an Italian explorer is supposed to have gone on the expedition on the orders of the King of Spain. The land he found was named as ‘Venezuela’. In his third expedition by following the river course, he could discover the delta region of the ‘Amazon’. It is believed that America was named after Amerigo.

In the year 1497, Vasco da Gama, the Portuguese seafarer set sail with a fleet of 4 ships and 170 sailors in the search of India. He reached the eastern coast of Africa and visited a few African ports like Mombasa and Malindi. At Malindi, he met an Indian navigator, and under his guidance Vasco da Gama landed at the Indian port of Calicut (Kozhikode) in 1498. He asked King Zamorin of Kozhikode for trading permission. After obtaining the permission he returned to Portugal. Thereafter he visited India twice. He became the first Viceroy of Goa and Kochi after the Portuguese rule was established there. The trading between European countries and India was initiated through his efforts.

Ferdinand Magellan is known as the Spanish explorer who organized the first expedition, which proved to be the first attempt at the circumnavigation of the earth. Unfortunately, when it had almost reached completion, Magellan was killed in the Philippines. However, his companions completed the circumnavigation. Charles I, the king of Spain had planned this expedition.

The French navigator and cartographer organized expeditions to North America. There he established French colonies. He established the city of ‘Quebec’ in Canada. On July 3, 1608, Champlain landed at the point of Quebec and set about fortifying the area by the erection of three main wooden buildings, each two stories tall, that he collectively called the Habitation, with a wooden stockade and a moat 12 feet (4 m) wide surrounding them. This was the very beginning of what is now Quebec City. Gardening, exploring, and fortifying this place became great passions of Champlain for the rest of his life.

Tasman was born in Holland. He contributed to the colonial rush for searching unknown lands by discovering New Zealand. In 1644 he surveyed the southwest coasts of New Guinea islands and discovered the region of Carpentaria in Queensland, a north-eastern state in Australia.

Captain James Cook of the British Royal Navy set his foot in New Zealand and Australia. He surveyed the islands in the Pacific Ocean and prepared accurate maps. He cut across 60,000 nautical miles during his journey of three years.

He was a French seafarer. He reached Tahiti after crossing the Pacific Ocean. In 1771 he wrote a book, ‘Voyages around the World’, which describes his journey to Tahiti. Using the information in this book, French missionaries reached Tahiti in the 19th century. They established a French colony in Tahiti. One of the islands and also a flowering climber ‘Bougainvillea’ is named after him.

Mungo Park, a Scottish explorer is known for his expedition to Western Africa. In 1795, he traced the course of the river ‘Niger’ as part of his expedition. He was killed during a second expedition, having successfully traveled about two-thirds of the way down the Niger. Park's death meant the idea of a Niger-Congo merger remained unproven but it became the leading theory among geographers. The mystery of the Niger's course, which had been speculated about since the Ancient Greeks and was second only to the Mystery of the Nile Sources, was not solved for another 25 years, in 1830, when it was discovered the Niger and Congo were in fact separate rivers.

The number of European colonies in the African continent increased because the continent had rich sources of diamonds, gold, copper as well as it was rich with fertile land, timber and forests. Later the Portuguese began to capture the Africans and sell them as slaves. Cheap human labor was the need of Europeans, which increased the demand for African slaves and helped to expand the slave trade.

Write the Name of the Historical place/person/event.

The first attempt of the circumnavigation of the Africa continent - ______ 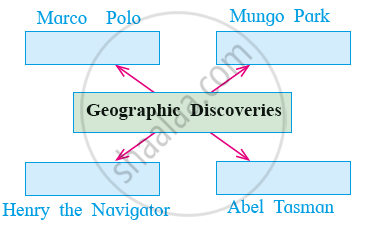 With the support of King Ferdinand and Queen Isabel of Spain, ______ set sail in search of India.

Write the Name of the Historical place/person/event.

Write the information about the Geographical discovery and explorer.

Write the information about the Geographical discovery and explorer.