Causes of the Rise of Colonialism

Causes of the Rise of Colonialism:

Colonialism was a result of the Industrial Revolution. Production increased enormously because of the new machines. However, the rate of local consumption was much lesser compared to the surplus rate of production. Hence, the immediate need of the Europeans was to find new marketplaces for selling their products. It was also necessary that those marketplaces be dependable and easy to dominate.

It is necessary to maintain low costs of production compared to competing nations in the market. The desire to create a monopoly in the market and the need to procure raw material at cheaper rates were two major factors, which made it essential for the European nations to establish clear supremacy.

The Industrial revolution added to the wealth of the European capitalists, who were already rich. They started searching for secure markets to invest their surplus funds. The markets in the less developed countries were quite secure from this point of view. Thus, the availability of surplus capital facilitated the rise of colonialism.

The history of capitalism is diverse and has many debated roots, but fully-fledged capitalism is generally thought by scholar to have emerged in Northwestern Europe, especially in Great Britain and the Netherlands, in the 16th to 17th centuries. Over the following centuries, capital accumulated by a variety of methods, at a variety of scales, and associated with many variations in the concentration of wealth and economic power. Capitalism gradually became the dominant economic system throughout the world. Much of the history of the past 500 years is concerned with the development of capitalism in its various forms.

The countries in Asia and Africa had rich sources of minerals like gold, diamonds, silver, and coal etc. This attracted the European merchants to various regions of Asia and Africa.

European nations had realised that the geographic location of some regions in Asia and Africa are advantageous for trade. Malta, Gibraltar, Aden, Singapore, Andaman, and Nicobar were some such regions, where the British established their hold.

European merchants needed a large number of labourers at a very cheap rate. The colonies fulfilled this need. Later, it contributed to the boom in the slave trade.

The Feeling of Racial Superiority:

The European colonialists claimed it to be their responsibility to civilize the people in Asia and Africa. This assumed role of the Europeans resulted in the conversion of many Asian and African people to Christianity. This also helped in the growth of colonialism. 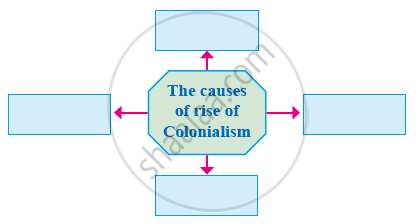 European traders were attracted to Asian and African regions; because ______