The Indian movements against British imperialism took many forms. One of the movements was of armed revolution. The main objective of the armed revolutionaries was to weaken government administration, to dispel the fear of the government in people’s minds and thus to uproot the British rule from India.

Ram Singh Kuka had planned a revolt in Punjab against the British Government. In Maharashtra, Vasudev Balwant Phadke was the one to do the same. Commissioner Rand’s methods of treating people during the plague epidemic in Pune were atrocious. Enraged by it, Damodar and Balkrishna Chapekar, the two brothers killed Rand.

British collector punished him with a life sentence. Anant Lakshman Kanhere a young Indian revolutionary killed Jackson to avenge the punishment given to Ganesh Damodar Savarkar. The government held Vinayak Damodar Savarkar for Jackson’s murder. He was arrested and had to face a trial in court. He was declared guilty and sentenced to rigorous imprisonment for 50 years at Andaman.

A revolutionary organisation named 'Anusheelan Samiti' was active in Bengal. Aurobindo Ghosh and his brother Barindra Kumar Ghosh were at the head of this orgnisation. The organisation had a center of bomb-making at Maniktala near Kolkata. In 1908, Khudiram Bose and Prafulla Chaki of Anusheelan Samiti made a plan of Kingsford's assassination who was an evil British magistrate. However, the horse cart which was bombed by them did not carry Kingsford but two British women instead. They both died. Prafulla Chaki shot himself and Khudiram Bose was arrested and hanged.

Shyamji Krishna Verma had founded the 'India House' in London. This organisation used to give scholarships to Indian students in England taking higher education. Madam Cama belonged to the group formed by Shyamji Krishna Verma. She was a socialist and a revolutionary. In the 'World Socialist Conference' in Germany, she raised the issue of India’s independence. She unfurled a flag representing India. Madanlal Dhingra shot Curzon Wyllie to death and was arrested and hanged for it. Indians in America and Canada had established a revolutionary organisation, which was named 'Gadar'. Lala Hardayal, Bhai Paramanand, Dr. Pandurang Sadashiv Khankhoje were among the main leaders of this organisation. Gadar means uprising. 'Gadar' was the name of the newspaper as well, published by this organisation. This newspaper gave the message of patriotism and revolution to Indians. Hutatma Vishnu Ganesh Pingale contributed in a great way in this work.

Ramprasad Bismil, Ashfaqulla, Roshan Singh, Rajendra Lahiri of 'Hindustan Republic Association' had masterminded a plan for raising money for revolutionary work, which came to be known as 'Kakori conspiracy'. They sacked a train that was carrying the government treasury when it had stopped at Kakori station in Uttar Pradesh. The government was prompt in action. All of them were captured immediately and hanged.

This was the time when some young people in India established the ‘Communist Party’ following the revolutionary thoughts of Karl Marx. Their aim was to uproot the colonial British rule and to establish the rule of working-class people (proletariat). Members of the Communist Party were tried under the charge of attempting armed revolution. The Merath case and Kanpur case in this context received a lot of publicity. Comrade Shripad Amrut Dange, Muzaffar Ahmed, Keshav Neelkanth Jogalekar were among the accused in these cases.

The young revolutionaries Chandrashekhar Azad, Bhagat Singh, Rajguru, and Sukhdev had a secular way of thinking. In 1928, they established ‘Hindustan Socialist Republican Association’ in Delhi. Their goal was to free India from British exploitation. They wanted to rip off the British system that exploited the farmers and labourers. Their organisation had an independent department called ‘Hindustan Socialist Republican Army’ for collecting arms and to execute their plans. Chandrashekhar Azad was the chief of that department.

The members of this organisation had completed several adventurous tasks. Bhagat Singh and Rajguru avenged the death of Lala Lajpat Rai. Saunders was killed to teach a lesson to British officers. The British Government had submitted two bills in the Central Legislative Assembly, which were absolutely damaging to civil rights. Bhagat Singh and Batukeshwar Datta exploded a bomb in the Legislative Assembly and surrendered to police. Bhagat Singh, Rajguru, Sukhdev were hanged at Lahore in 1931 under the charge of treason. Chandrashekhar Azad became a martyr, fighting the British Forces in the Alfred Park in Allahabad.

Surya Sen was the leader of the revolutionary group working with the Hindustan Socialist Republican Army, in Chittagong, in Bengal. He prepared a plan to attack the British armories. They carried out the plan. While they were nearing success, unfortunately, Surya Sen and some of his colleagues were captured by the police. Surya Sen and his colleagues sacrificed their lives for the cause of the nation. Kalpana Dutt, one of this group, got a life sentence. Preetilata Waddedar escaped the police but sacrificed her own life. Shanti Ghosh and Suniti Chaudhury, the two school-going girls shot Charles Buckland, the British magistrate. They were caught and sentenced to imprisonment for life. Beena Das, a member of the Indian National Congress, attempted to kill Stanley Jackson, the Governor of Bengal, by shooting at him during the convocation ceremony of the University of Calcutta (Kolkata). She was caught and sentenced to nine year’s rigorous imprisonment.

The revolutionaries have contributed significantly to the Independence Movement in India. They were courageous and determined personified. Their loyalty to the nation and readiness to sacrifice their lives is unmatched. Their sacrifice has been a source of inspiration to all.

Choose the correct alternative and complete the statements. 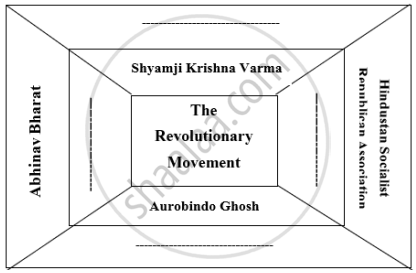 Choose the correct reason and complete the sentence.

Young people in India established the Communist Party because ______.

Write in detail about the armed revolutionaries in India.

Objective of the revolutionaries

Write in brief about the early struggle against the British before 1857.