Contribution of the Rulers of Princely States in India

Contribution of the Rulers of Princely States in India:

Maharaja Sayajirao of Baroda State had adopted progressive policies. He made provision of free schooling and free hostels for the students from the untouchable- tribal class. He also encouraged women’s Maharaja Sayajirao education and also Gaikwad opened a center for physical training of women. He started various social programs, such as community feasts for all castes (‘sahabhojan’), gram panchayat in every village, literate gram panchayat members, library in every village, compulsory primary education, compulsory physical training for boys and girls, ban on child marriage, widow remarriage, etc. He also provided courses based on agro-industries for students from farmer families. He passed a resolution for assuring a share in the ancestral property to married as well as widowed women.

The ruler of the princely state of Kolhapur, Rajarshi Shahu Maharaj supported Dr. Babasaheb Ambedkar’s leadership, while leading the ‘Non-brahminical Movement’ in his state. He made a public declaration of reservations and passed a resolution for free and compulsory primary education. He also very strongly opposed the customs of ‘Rotibandi’ (restrictions on eating together), ‘Betibandi’ (restrictions on inter-caste marriage), and ‘Vyavasaybandi’ (restrictions on practicing occupations other than the ancestral occupation of one’s caste). He made a law for inter-caste marriage. People in his state were permitted to choose any occupation. Thus, all of these social reformers created a positive picture for the future of our country. It was necessary to build a society with a firm intellectual and rational base for obtaining freedom from British rule.

Explain the statement with reason.

Write the name of the historical place/person/event.
The one who made the law of free and compulsory primary education in Kolhapur Princely State 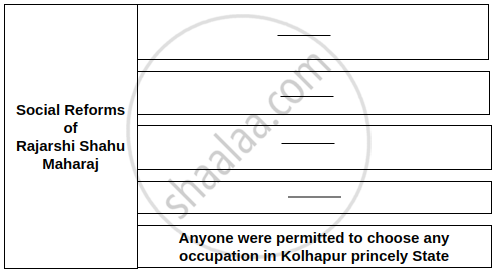