A line with two end points is called a line-segment and a part of a line with one end point is called a ray.  Note that the line segment AB is denoted by `bar (AB)` . The ray AB is denoted by `vec (AB)` , and a linbe is denoted by `AB`. However, we will not use these symbols, and will denote the line segment AB, ray AB, length AB and line AB by the same symbol, AB.
If three or more points lie on the same line, they are called collinear points; otherwise they are called non-collinear points.
An angle is formed when two rays originate from the same end point. The rays making an angle are called the arms of the angle and the end point is called the vertex of the angle. There are different types of angles , such as acute angle, right angle, obtuse angle, straight angle and reflex angle in following fig. 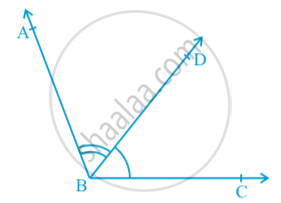 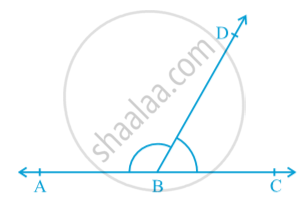 form a line then it will look like in above figure. In this case,
∠ ABD and ∠ DBC are called linear pair of angles.
The vertically opposite angles formed when two lines, say AB and CD, intersect each other, say at the point O in following fig. 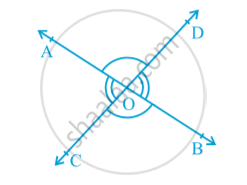 There are two pairs of vertically opposite angles. One pair is ∠AOD and ∠BOC.

For what value of x + y in figure will ABC be a line? Justify your answer.

In figure, which of the two lines are parallel and why? 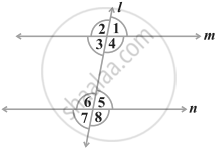