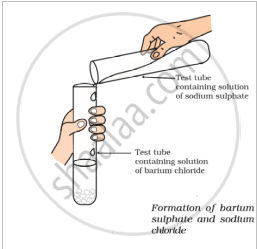 The white precipitate of BaSO4 is formed by the reaction of SO42- and Ba2+. The other product formed is sodium chloride which remains in the solution. Such reactions in which there is an exchange of ions between the reactants are called double displacement reactions. 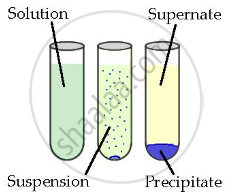 When the substance ‘A’ is added to a solution of BaSO4, a yellow precipitate is formed.

Choose and write the correct option.

What is the type of the following reaction?

If sodium chloride is added to the silver nitrate solution:

a. which precipitate is formed?
b. name the type of reaction.
c. write the chemical equation.

Study the following chemical reaction and answer the questions given below :

When the gas formed on heating limstone is passed through freshly prepared lime water, the lime water turns milky.

It takes time for pieces of Shahabad tile to disappear in HCl, but its powder disappears rapidly.