Mapping Space Around Us

Mapping Space Around Us:

When we draw a picture, we attempt to represent reality as it is seen with all its details, whereas, a map depicts only the location of an object, in relation to other objects. Secondly, different persons can give descriptions of pictures completely different from one another, depending upon the position from which they are looking at the house. But, this is not true in the case of a map. The map of the house remains the same irrespective of the position of the observer. In other words, perspective is very important for drawing a picture but it is not relevant for a map.

We can summarise that:

Shaalaa.com | Mapping space around us

Look at the given map of a city. (c) In red, draw a short street route from library to the bus depot.

(d) Which is further east, the city park or the market?

(e) Which is further south, the Primary School or the Sr. Secondary School?

In the given map, the distance between the places is shown using the scale 1 cm : 0.5 km. Then the actual distance (in km) between school and the book shop is ______. 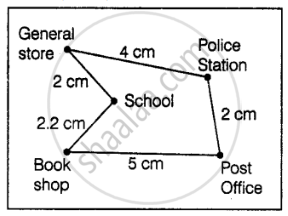 The ratio of the number of general stores and that of the ground is ______.