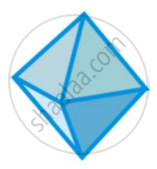 Types of the polyhedron:

In the above table, each regular polyhedra is named based on its number of faces. The net below each sketch shows a 2D picture of all of the faces of the polyhedron.

A non-polyhedron is not a closed space figure, maybe one or more of the sides is a curved surface. Thus, Solids with curved faces are called Non-polyhedrons.
Example: Sphere, Cylinder, Cone, etc.

Shaalaa.com | What are Polyhedrons?

Draw nets for the following polyhedrons:

Name the polyhedron that can be made by folding each of the following nets: