A quantity that has magnitude as well as direction is called a vector.
A directed line segment is a vector in above  fig., denoted as `vec (AB)` or simply as `vec a` , and and read as 'vector `vec (AB)`' or 'vector `veca`'.
The point A from where the vector `vec (AB)` starts is called its initial point, and the point B where it ends is called its terminal point. The distance between initial and terminal points of a vector is called the magnitude (or length) of the vector, denoted as
|`vec (AB)`|, or |`vec a`|, or a. The arrow indicates the direction of the vector.

Let ‘l’ be any straight line in plane or three dimensional space. This line can be given two directions by means of arrowheads. A line with one of these directions prescribed is called a directed line in following  first and second fig . 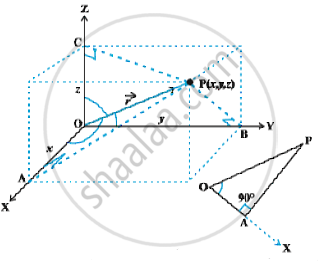 one may note that the triangle OAP is right angled, and in it, we have `cos alpha = x/r`( r stands for |`vec r`|).  Similarly, from the right angled triangles OBP and OCP, we may write  `cos beta= y/r` and `cos gamma = z/r`.  Thus, the coordinates of the point P may also be expressed as (lr, mr,nr).  The numbers lr, mr and nr, proportional to the direction cosines are called as direction ratios of vector `vec r` , and denoted as a, b and c, respectively.

Using Vectors, prove that angle in a semicircle is a right angle