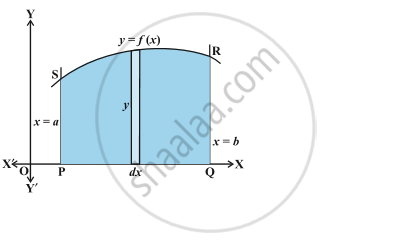 The area under the curve as composed of large number of very thin vertical strips. Consider an arbitrary strip of height y and width dx, then dA (area of the elementary strip)= ydx, where, y = f(x).
This area is called the elementary area which is located at an arbitrary position within the region which is specified by some value of x between a and b.  The total area A of the region between x-axis, ordinates x = a, x = b and the curve y = f (x) as the result of adding up the elementary areas of thin strips across the region PQRSP. Symbolically, we express
A = `int_a^b dA = int_a^b ydx = int_a^b f(x) dx`
The area A of the region bounded by the curve x = g (y), y-axis and the lines y  =  c, y = d is given by 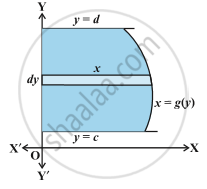 The area bounded by the curve, x-axis and the ordinates x = a, x = b come out to be negative. But, it is only the numerical value of the area which is taken into consideration. Thus, if the area is negative, we take its absolute value, i.e., `|int_a^b f(x) dx|`.
Generally, it may happen that some portion of the curve is above x-axis and some is below the x-axis as shown in the following  Fig . 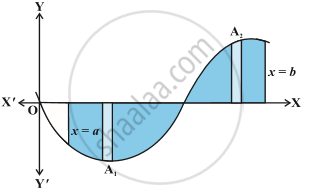