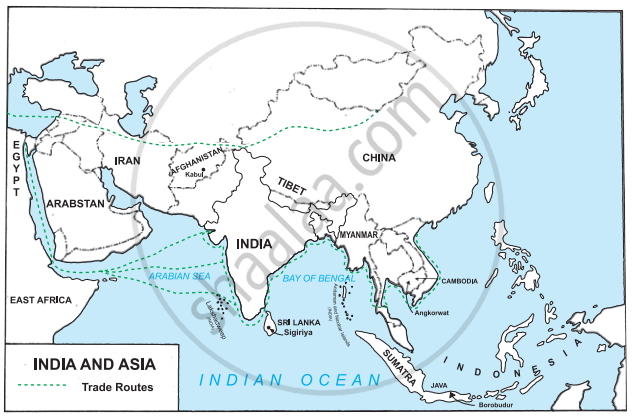 The Indian trade with distant lands is mentioned in the texts like ‘Kathasaritsagara’, Jataka Stories, ‘Deepvamsa’, ‘Mahavamsa’, etc. These texts narrate many stories of the sea travels and adventures of the Indian merchants. The Sangham literature mentions the boats of the yavanas who brought gold and carried back black pepper in exchange. There are a number of inscriptions reported from the western parts of Maharashtra, that mention the donations given by yavanas.

Mahavamsa is the most important Pali epic poem. Mahavamsa means the “Great Chronicle”. It was composed by a Buddhist monk at the Mahavihara temple in Anuradhapura about the fifth century A.D. It’s a historical poem in Pali Language which deals about the Kings of Sri Lanka. The Mahavamsa, Dipavamsa, Culavamsa (small chronicle) all together are sometimes known as Mahavamsa. It deals with the royal dynasties of not only Sri Lanka but the whole Indian subcontinent and is known as the world’s longest unbroken historical accounts. The consecration of Asoka and details of Selucus and Alexander have been detailed in it.

‘Ophir’ a port city mentioned in the Old Testament (Bible) is supposed to be referring to Sopara near Mumbai. The Indian teakwood and the Himalayan cedar timber was in demand in Babylon. Besides the timber, commodities like sandalwood, ivory, tortoise shells, monkeys, peacocks, pearls, precious and semi-precious stones, as well as black pepper, cinnamon, and incense were also exported from India. Sailor’s handbook of his sea travels – Periplus of Erythrean sea. Ancient port cities like Bharuch, Sopara, Kalyan, etc are mentioned in the Periplus. Beside the periplus there are other texts like ‘Geographia’ written by the Greek historian Strabo, ‘Naturalis Historia’ by Pliny the elder, ‘Geographia’ written by the Greek mathematician-geographer Claudius Ptolemy, ‘Indica’* by the Greek historian Arrian, etc., which are the sources of information about the Indo-Roman trade.

Indica is the name of a short military history about interior Asia, particularly the Indian subcontinent, written by Arrian in 2nd-century CE. The subject of the book covers the expedition of Alexander the Great that occurred between 336 and 323 BCE, about 450 years before Arrian. The book mainly tells the story of Alexander's officer Nearchus voyage from India to the Persian Gulf after Alexander the Great's conquest of the Indus Valley. However, much of the importance of the work comes from Arrian’s in-depth asides describing the history, geography, and culture of the ancient Indian Subcontinent. Arrian wrote his Indica in the Ionic dialect, taking Herodotus for his literary mode.

Indika (Greek: Ἰνδικά; Latin: Indica) is an account of Mauryan India by the Greek writer Megasthenes. The original book is now lost, but its fragments have survived in later Greek and Latin works.

Roman coins were found in Tamil Nadu. The trade took place between the Indian and Roman Empire in Europe through the Mediterranean Sea. Usually, the Trade depended on weather and season. It is also said that roman emperor Nero paid One million coins to make an Emerald Chalice of Indian Make. Pliny the elder had expressed concern about that the Roman gold being drained into India. He compared India to an enormous sink draining all gold of the world. Strabo expressed that animals from India were of great demand in the Roman Empire so that the sailors reached the coast safely. Crows were trained for these purposes were known as ‘Dishakak’. A Harappan terracotta tablet shows a boat and dishakaks flying above it.

Apart from the Roman gold coins, many other things like lead, zinc, corals, wines, olive oil were the Roman imports coming to India. The archaeological survey conducted in the sea near ‘Bet Dwaraka’ in Gujarat, in the year 2000-2001 has yielded amphorae of various sizes, anchors, potsherds and a lead ball, etc. The amphorae were used to transport olive oil and wines, which were imported from Rome. There are many archaeological sites, which have yielded evidence of the Indo-Roman trade. It confirms that the cities in Maharashtra like Paithan, Ter, Kolhapur, Bhokardan (Bhogvardhan) in the Jalana district were important trading centers.

The crows were known to ancient sailors as the birds who begin to fly in the direction of land, the moment it is in their view. The sailors used to follow the crows in order to reach the coast safely. Crows trained for these purposes were known as ‘Dishakak’. A Harappan terracotta tablet shows a boat and dishakaks flying above it. The story of ‘Baveru Jataka’ offers a testimony to the use of dishakak by ancient Indian sailors to reach the coast. This story also clearly indicates that the ancient Indian merchants used to sail to distant lands. ‘Baveru’ is identified with Babylon. Babylon was a kingdom that existed in Mesopotamia during 1800-600 B.C.E. The Achaemenid emperor Cyrus II conquered Babylon in 539 B.C.E. This story confirms that ancient Indian merchants used to carry birds like crow and peacock for selling.

Choose the correct alternative and complete the sentence.
The coin hoards found in ____________ had Roman gold coins in it.

Choose the correct alternative and complete the sentence.
The famous king Hammurabi had ruled the kingdom of ________.

Choose the correct alternative and complete the sentence.
The route that links Asia and ____________ is referred as the ‘Silk Route’.