India and Gandhara (Afghanistan and Pakistan)

India and Gandhara (Afghanistan and Pakistan):

It is apparent that geographically Afghanistan (Gandhara) was favourably situated on the trade route that linked India and Central Asia. It had close cultural connections with India from the ancient period of janapadas until the introduction of Islam. Whether it were the invaders from Central Asia, or the Buddhist monks sent out by Emperor Ashoka, or the Chinese monks travelling to India, all had to pass through Afghanistan

Afghanistan has been an important trading and craft centre for over 2000 years connecting the civilizations of Persia, Central Asia with India. However, over 3 decades of war have undermined Afghanistan’s unique traditions of art and architecture. Today, the biggest challenge for Afghanistan is to rediscover and sustain its ancient art and architectural illegal opium trade and providing employment to the most vulnerable communities, particularly women and the rural people. India and Afghanistan share centuries-old cultural heritage with deep-rooted linkages in the field of music, arts, architecture, language and cuisine.

We have seen that the 13th edict of Emperor Ashoka mentions the names of Greek kings, who were his contemporaries. It also mentions that people in their kingdoms were following the path of morality as outlined to his message of Dhammavijaya. Among these kingdoms was included the kingdom of Kamboja in Afghanistan. The Ashokan edict at Kandahar is in Greek language and the script used for it is Aramaic. This inscription shows that Afghanistan was an integral part of Ashoka’s empire. Ashoka had sent ‘Thera Mahyantika’ (Majjhantika) to Kashmir and Afghanistan and ‘Thera Maharakkhita’ to the Greek (Yona) kingdoms, for spreading the teachings of Gautama Buddha.

Thera Mahyantika was sent to Kashmir and Gandhara also areas with strong Hellenic presence. Although he is not identified as Greek in the Mahavamsa, his name probably means Maha (great)+Antika (Antiochos)

The Thera Maharakkhita is said to have been sent to the country of the Greeks. He would probably have been Greek as well due to the nature of his mission, but this is unconfirmed.

Kanishka’s empire had spread from Pataliputra in the east to Kashmir in the north and further to Central Asia. Purushspur (Peshawar) and Mathura were the two capitals of his empire. Ancient Kapisha (Begram) was an additional capital of the Kushanas, which was located on the silk route at a vantage point. The trade route from Afghanistan to China was under the rule of Kushanas. This route starts from Taxila extended further, crossing through Khyber pass to Bamiyan in Afghanistan and from there to China through the plateau of Pamir. In the Kushana period, Buddhism reached China by this trade route. Some of the coins of emperor Kanishka carry the image of Gautama Buddha. It also has a legend which reads, ‘Boddo’. This is the oldest representation of Gautama Buddha in an image form on a coin.

The Chinese monks like Fa-Hien, Yuan Chwang, who travelled through India have described the Buddhist viharas and stupas in India. There are numerous remains of viharas and stupas in Afghanistan. Among them a place called ‘Shahji-ki-Dheri’ near Peshawar in Pakistan was excavated. The importance of the stupa discovered at this place is underlined by the fact that it was built during Kanishka’s period. It is also known as ‘Kanishaka’s Stupa’. According to prevailing tradition, the sacred remains in the box (Karnataka) found there are of Gautama Buddha. The box has an inscription. It also mentions the name ‘Agnishala’, the main supervisor of the building work of ‘Kanishka Vihara’, in the precints of ‘Mahasena Sangharama’. This box is in the Peshawar museum at present. The ancient ‘Nagarhar’, modern ‘Hadda’ near Jalalabad in Afghanistan was another important centre of Buddhism. There are several remains of stupas and viharas scattered over the place. The sculptures found around the stupas are excellent specimens of Gandhara style. ‘Takht-i-Bahi’ is another important place, which is enlisted as ‘World Cultural Heritage’. It is in the Pakhtunkhwa province of Gandhara region. It is a part of Pakistan now. The building of the vihara complex at Takht-i-Bahi had begun in the 1st century C.E. The work was continued till 7th century C.E. Among the remains discovered there are three stupas and other buildings. Apart from these remains in Afghanistan, the famous ‘Bamiyan statues of Buddha’ are declared as the World Cultural Heritage. Bamiyan is 250 kilometres away from Kabul, to the west of it. There are about 750 caves hewn out in one of the cliffs of the mountain ranges known as ‘Kuh-e-Baba’. There were very beautiful Buddhist murals painted inside these caves. The same cliff has two huge niches dug in it. In these niches were built two standing Buddha statues in stucco. One of it was 53 metres tall the other was 38 metres. The core of these statues was carved out in the original sandstone of the cliff. The core was plastered with several layers of mud mixed with straw. The folds of Gautama Buddha’s robes were modelled in this clay plaster. His forearms were supported with the help of wooden armatures and fixed with wooden pegs. According to Yuan Chwang, the statues were surrounded by colourful murals and even the statues were painted and decorated with gold coating and precious stones. These statues were destroyed by Taliban, a fundamentalist organisation in 2001 C.E. The government of Afghanistan, with the help of UNESCO and various associations from countries like Japan, France, Switzerland, etc. is working to restore this World Cultural Heritage. Some of the murals inside the Bamiyan caves were rediscovered, when the work of restoration began. Also, remains of a 19 metres long ‘Mahaparinibban’ image of Gautama Buddha were found. According to Yuan Chwang’s description, there was a library of rare Buddhist manuscripts at Bamiyan. Archaeologists have indeed found birch bark and palm-leaf manuscripts in a Bamiyan vihara. Some images of Hindu gods and goddesses have also been found in Afghanistan. Among them is an image of Ganesha found near the city of Kabul. This image is dated to 4th century C.E. and it is the earliest image among the extant Ganesha images. It may be noted that even in India an image of Ganesha, as ancient as this one is not found. There is one temple called ‘Khair Khana’ near Kabul. The excavations at this site have yielded an image of God Surya mounted on a chariot. A detailed review of all the Buddhist and Hindu remains in Afghanistan is not possible in this book. However, the above examples are enough to confirm the close cultural association between the Gandhara region and India before the advent of Islam.

Write the name.
A place in the Gandhara region enlisted as a world Cultural heritage.

Write the name.
Buddhist monks in the 4th century B.C.E. who translated many Buddhist texts in Chinese language. 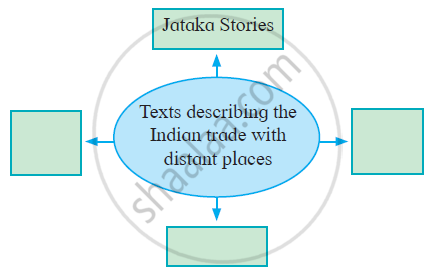 Explain the following statement with reason.
The merchants rarely used the shorter line of the Silk Route.