Ashoka became the emperor of the Mauryan empire after the death of Bindusara Chandragupta Maurya was succeeded by his son Bindusara, who ruled approximately for 25 years. He adopted the title ‘Amitraghata’, meaning ‘Slayer of Foes’. The title signifies that he was a great soldier and a conqueror like his father.  He had inherited a vast empire from his father and ably ruled it. He also maintained rapport and friendly relations with the Greeks, especially Antiochus, the successor of Seleucus. Pliny remarked that an ambassador was sent to the court of Bindusara by the King of Egypt. Bindusara died in 273 BCE and was succeeded by Ashoka.

He got himself coronated in 268 B.C.E. He called himself as ‘Devanampiyo Piyadasi’ (Beloved of the Gods) in many of his rock edicts and pillar inscriptions. During the early period of his rule, Ashoka adopted his ancestors’ policy of Digvijaya and the expansion of the kingdom. He attacked Kalinga and conquered it. Ashoka’s victory at Kalinga proved to be a turning point in history as well as in the life of Ashoka. Kalinga stood in the way of the southern routes from the Ganges valley, a powerful maritime area, which could also become a valuable source of income for the Mauryan Empire. After 8 years of his coronation, Ashoka declared a war on Kalinga in 261 BCE. The people of Kalinga retaliated valiantly even though they end up defeated. In this war, 150 thousand men were carried away as captives, 1 lakh were slain and many times more were wounded or went missing. After his Kalinga campaign, when Ashoka toured the province, what he saw was the state of Kalinga which, once was full of natural beauty, was completely devastated. Everywhere, he heard the cries of orphaned children, screams of widows, and agonies of the wounded and handicapped. The horrors of the war shocked Ashoka to the core, who felt great remorse for the atrocities the war brought in its wake.

As a result, his mind was stirred and he was taken over by repentance and grief. He took a vow to spend his life for the cause of Humanity. There was a great human loss in this war. Ashoka became victorious. His mind got diverted towards the non- violent, peaceful Buddhist religion. The desire of Digvijaya was replaced by Dharmavijay (Dhammavijay). His career proved to be important because of the religious ideals propagated by him and the creation of a mechanism until it in people’s life. Ashoka leaned towards Buddhism, which taught peace, non-violence, love, and compassion. Ashoka’s policy of ‘Dhamma’ meant virtuous conduct based on moral values. He sent monks to various countries for the spread of Buddhism.

After the Kalinga war, Ashoka embraced Buddhism under the guidance of the monk Upagupta. He has talked about this in his 13th rock edict. He styled himself as the defender of the faith. After his conversion to Buddhism, Ashoka appointed Dharmamahamatras to carry out humanitarian works, propagate Buddhism, take care of the Buddhist Sangha, and the different schools of Buddhist thought. He visited various sacred Buddhist places, held a Buddhist council, sent missionaries all over the country and surrounding countries, and constructed pillars, Stupas and Viharas. The first Buddhist council was held at Rajgriha after the mahaparnibban of Gautama Buddha. King Kalashoka organised the second council at Vaishali. Ashoka organized the third Buddhist council at the capital Pataliputra. The kings who succeeded Ashoka were not efficient. This led to the decline of the Mauryan empire. Brihadratha was the last king of the Mauryan dynasty. He was killed by his General Pushyamitra who then came to power.

Choose the correct reason and complete the sentence.

Ashoka’s victory at Kalinga proved to be a turning point in history as well as the life of Ashoka.

The rock edicts of Ashoka are important sources of history. 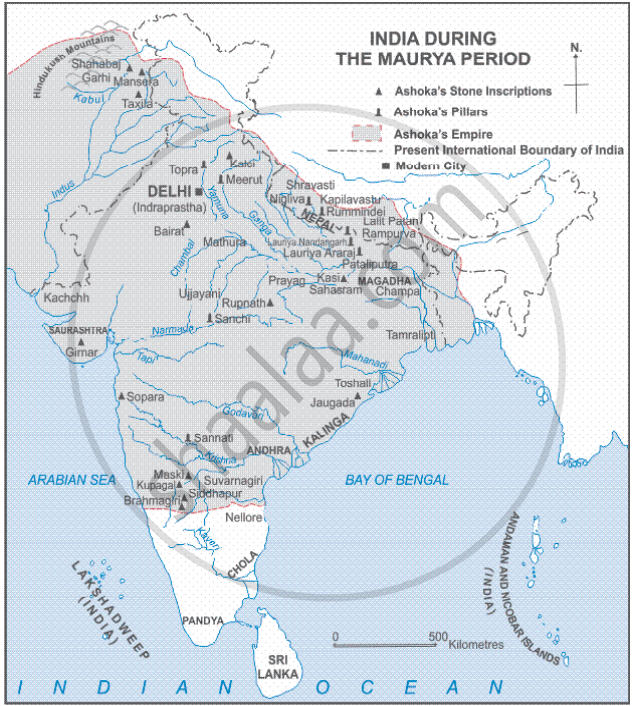