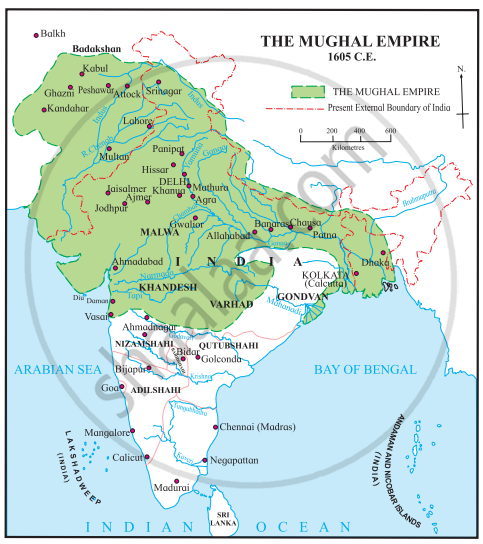 The Mughals began to rule parts of India from 1526, and by 1700 ruled most of the sub-continent. After that, they declined rapidly, but nominally ruled territories until the 1850s.

In the beginning of the 16th century, the political condition in India was somewhat disturbed. The Sultanate rule had begun to decline after Muhammad Tughluq. The Delhi Sultanate broke down completely and many new independent kingdoms emerged in the North, Central, and South India. The Bahamani kingdom got divided into five branches. The prosperous Vijaynagar empire was destroyed by the five Islamic ruling houses in the South. During the same period, the Portuguese began to settle on the western coast of India. The traditional military system of the Indian rulers in the mediaeval period was not capable of facing the onslaught of new challenges. The Indians were not familiar with modern weaponry. Taking advantage of all this, the Mughals established their rule in India.

Ibrahim Khan Lodi (died 21 April 1526) became the Sultan of Delhi 1517 after the death of his father Sikander Lodi.  He was the last ruler of the Lodi Dynasty, reigning for nine years between 1517 until being defeated and killed at the Battle if Panipat by  Babur’s invading army in 1526, giving way to the emergence of the mughal empire in India. The grand army of Ibrahim Lodi could not survive in front of Babur in the battle of Panipat. Babur defeated Ibrahim Lodi on the strength of configuration skills, strong artillery, the system of secret intelligence, and strong leadership. Babur established his rule in Delhi.

Babur defeated Ibrahim Lodi at the First Battle of Panipat in 1526 CE and founded the Mughal empire.  He faced opposition from Rana Sangha, who at first promised to help Babur defeat Ibrahim Lodi; however, he later backed out upon realizing that Babur had plans to stay in India. The Rana prepared an army of  Rajputs and Afghans to force Babur out of India, however, the Rana was defeated in the Battle of Khanwa (1527) after which he was poisoned to death (1528) by his own men. Babur’s elder son Humayun ascended the throne after Babur. But Humayun was deprived of the kingdom due to the defeat at the hands of Shershah Sur of Bihar.

Sher Shah Sur was the founder of the Suri Empire in the northern part of the Indian Subcontinent with its capital in Sasaram in modern-day  Bihar. He introduced the currency of the Rupee. Shershah Sur made some reforms in the administrative setup. He brought together the Afghan sardars scattered in North India and established the Afghan rule. The descendants of Shershah were not efficient. Hence after the death of Shershah, Humayun regained his lost kingdom. After Humayun, his son Akbar ascended the throne. He proved to be the greatest Mughal Emperor because of his qualities such as high intelligence, tolerance, firmness, and courage.

The kingdom established by Babur was transformed into a great empire by Akbar. He established his rule from Kabul to Bengal and Kashmir to Varhad-Khandesh. During this period, Rana Pratap, the ruler of Mewar, put up a strong resistance against Akbar. Akbar could never win a war with Rana Pratap. Hence for the expansion of the empire, he adopted the strategy of persuasion with the Rajputs. Akbar had realized that if the Mughal rule has to be strengthened in India then he had to adopt non-offensive policies, which would be popular.

After Akbar, Jahangir, Shahjahan, and Aurangzeb ruled efficiently. Aurangzeb attempted to expand his empire in the Deccan with prolonged campaigns. Aurangzeb's reign is notable for his wars in frontier provinces, his political policies in North and south India, staunch religious policies, and the Mughal- Maratha conflict. This period is marked by the expansion of the Maratha kingdom, interference by the Europeans in the political affairs of India, and the decline of Mughal power. Finally, the aftermath of the struggle of Independence in 1857 C.E., saw the end of the Mughal rule under Bahadur Shah.