The Early Vedic Culture as Unfolded Through Vedic Literature

The Early Vedic Culture as Unfolded Through Vedic Literature:

It is one of the oldest deciphered literature. The language used is Sanskrit. It is old and sacred literature to many religions. This literature has been found highly informative and useful to learn about the past. According to the texts, the messages or preaching were revealed only to the Rishis by the creator himself. This was not written initially and was passed to the next generation by oral recitation and finally recorded. The Vedas were composed around 3000 BC – 2500 BC.

The Samhitas are books that comprise hymns or psalms. They project the religious life of people during that period. Hinduism is one of the oldest religions. Although it is unwritten i.e. they are in poetic form. It is orally transmitted through generations and was later on written.

This is not about the Brahmin religion but they are the literary records of the Vedic Period. These texts give information about the Vedic mantras. The Brahmanas were written in prose form. It has text on the value and importance of sacrifices. The sacrifices were usually simple and happy.

All the aspects of human life originated from Upanishads. Upanishad (head) is the fountain of INDIAN PHILOSOPHY. Karma, Mukti, Maya, and transmigration of the soul, etc were discussed in Upanishad.

There is a school of thought, according to which, the Late Harappans, that is the Vedic people, migrated because of adverse climatic conditions and natural calamities. They migrated to Ganga-Yamuna Doab in the east and also went toward the west to Iran, Iraq, Egypt, etc. The evidence of the inscriptions found at ‘Boghazkui’ in Iraq is used to confirm it. These inscriptions contain the text of a treaty between two tribes called Hittite and Mittanni. It begins by invoking deities like Indra, Varuna, and Nasatya. This and similar evidence is offered by some of the European and Indian scholars to prove that Vedic people arrived in India from the West. This is one of the examples to illustrate the way the riddles in history are created. So far, scholars have been unable to solve the riddle of the ‘Aryans’ by putting together the archaeological and literary evidence. Nevertheless, it seems to be certain that the Later Vedic people migrated by two different routes. The Vedic literature mentions ‘Uttarapath’ (The northern route) and ‘Dakshinapath’ (the southern route). Both of these routes pass through regions, which differed drastically. Accordingly, their environment also differed. Considering this, it becomes clear that the ancient people managed to traverse through extremely difficult terrains. The northern route extended from Central Asia to Saptasindhu and from there to Himalayan foothills and then proceeding to Ganga-Yamuna Doab, reaching the delta region thereafter. The southern route formed a link between the Ganga-Yamuna Doab and the southern regions of India. It extended from the southern part of Sindh, through Kutch, South Rajasthan, Malwa, and from there to the Deccan Plateau. We have seen in the previous lesson that the Harappan people reached Maharashtra via this route.

A potter is mentioned as an artisan in the ______ for the first time.

The Rigvedic people subsisted on agriculture.

Complete the concept map given below. 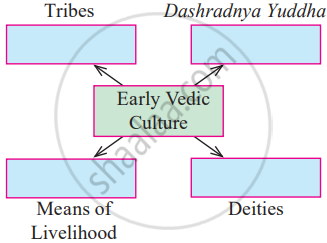 The god who protected the animals was known as ______.

The importance of agriculture is clearly emphasised in the ______mandala of the Rigveda.