The changing features of social and economic life, such as the growth of towns, expansion of the artisan class, and the rapid development of trade and commerce were closely linked with changes in another sphere; that religion and philosophical speculation. At the end of the Vedic period questions about abstract aspects of human existence began to gain attention. It included questions about matters like the meaning of human life, its significance in the infinite nature of the universe, the mystery of death, and the journey of the soul after death. It resulted in the creation of various philosophical texts, known as ‘Upanishadas’. They included schools propounding the immortality of the soul to the schools that refuted the very existence of the soul. The latter included ‘Charvaka’ or ‘Lokayat’ school, which openly opposed the social organisation based on the Vedic authority, beliefs, and rituals. This school also propagated that the ‘Truth’ comprises only those things, which are subject to sensory experience. The Charvaka/Lokayat school is one of the ancient Indian schools of thought (darshan) which denies the existence of ‘God’.

The intellectual and philosophical re­sponse to these social changes was rich and varied marking a high point in philosophical achieve­ments that remained unsurpassed in later centuries. All the major ideas of Indian philosophy can be seen, at least in rudimentary form in the 6th century B.C. The period was characterized by the parivrajakas or sramanas who renounced their household status.

They wandered about from place to place with the object of the meeting and having discussions with others like them. It is through this ceaseless movement that they propagated their ideas and built up their following.

What united all the sramanas together was their opposition to the established tradition of the Brahmins based on the cult of sacrifice, central to the ideology of the latter. They were also opposed to the claims of the brahmana’s pre-eminence in society and for these reasons they have been described as non-conformist sects or heterodox sects. Among the various streams of thoughts, a large number of people were attracted to the teachings of Vardhamana Mahavira and Gautama Buddha. Their teachings showed the way to overcome the disparity in the society resulted from the varna and caste system.

Both, the Jaina and the Buddhist schools of thought are considered as the ‘nastik’ schools. Both refuse to accept the authority of the Vedas and the Vedic rituals. Both the schools had followers in large numbers from all strata of society.

Complete the concept map given below. 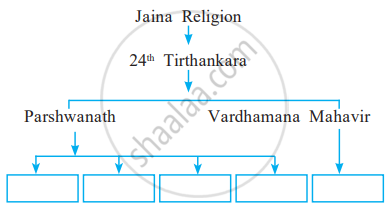