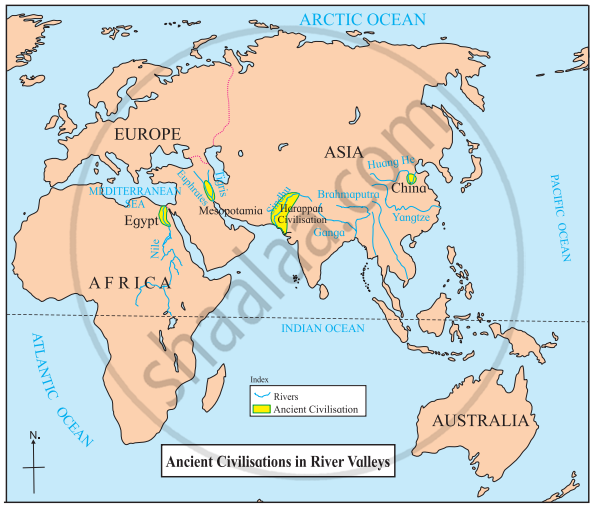 1. The Valley of Euphrates and Tigris - Mesopotamia:

Ancient Mesopotamia included modern Iraq, Syria as well as the western regions of Iran and the south-eastern regions of Turkey. Mesopotamia is the Greek name of the region between the two rivers, Tigris and Euphrates. Mesos means the ‘middle one’. Potamos means ‘river’. The region between the two rivers is ‘Mesopotamia’. The Mesolithic people began to stay in this region for longer times because of the availability of ample water. Also both the rivers flooded annually, making the soil on their banks very fertile. The camps of Mesolithic people developed into the first settled neolithic villages. These first villages are dated to 10000 years B.C.E. The farmers in these villages grew wheat and barley.

Surrounded by four countries (Iran, Iraq, Turkey, and Syria), the Tigris River is the second largest river in western Asia. With the Euphrates, it makes up a river system that borders Mesopotamia in the area known as the Fertile Crescent. An important source of both travel and irrigation, the Tigris also has a rich history that dates back to the earliest known civilizations because of its importance to a largely arid region. The Euphrates provided the water that led to the first flowering of civilization in Sumer, dating from about the fourth millennium B.C.E. Many important ancient cities were located on or near the riverside, including Mari, Sippar, Nippur, Shuruppak, Uruk, Ur, and Eridu.

The river valley formed the heartlands of the later empires of Babylonia and Assyria. For several centuries, the river formed the eastern limit of effective Egyptian and Roman control and western regions of the Persian Empire. Also, the Battle of Karbala, a defining moment in Islamic history, when Imam Hussain, along with his family and friends were martyred, occurred at the banks of Euphrates River.

The Fertile Crescent is a crescent-shaped region in the Middle East, spanning modern-day Iraq, Syria, Lebanon, Israel, Palestine, Jordan, Egypt together with the southeastern region of Turkey and the western fringes of Iran. Some authors also include Cyprus.

The region has been called the "cradle of civilization" because it is where settled farming first emerged as people started the process of clearance and modification of natural vegetation in order to grow newly domesticated plants as crops. Early human civilizations such as Sumer in Mesopotamia flourished as a result.

The country in the northern parts of the African continent and in the valley of the Nile river is ‘Egypt’, called the father of African rivers. It rises south of the Equator and flows northward through northeastern Africa to drain into the Mediterranean SeaThe Greek historian Herodotus wrote that "Egypt was the gift of the Nile". An unending source of sustenance, it played a crucial role in the development of Egyptian civilization. Because the river overflowed its banks annually and deposited new layers of silt, the surrounding land was very fertile. The Ancient Egyptians cultivated and traded wheat, flax, papyrus, and other crops around the Nile. The success of ancient Egyptian civilization came partly from its ability to adapt to the conditions of the Nile River valley of agriculture. The predictable flooding and controlled irrigation of the fertile valley produced surplus crops, which supported a more dense population, and social development and culture. With resources to spare, the administration sponsored mineral exploitation of the valley and surrounding desert regions, the early development of an independent writing system, the organization of collective construction and agricultural projects, trade with surrounding regions, and a military intended to assert Egyptian dominance. Motivating and organizing these activities was a bureaucracy of elite scribes, religious leaders, and administrators under the control of a pharaoh, who ensured the cooperation and unity of the Egyptian people in the context of an elaborate system of religious beliefs.

Napoleon Bonaparte had taken along with many scholars from various fields during his Invasion of Egypt in 1798. They studied the ancient remains in Egypt and published it. These studies received a momentum because of the decipherment of the Rosetta inscriptions. It became possible to read Egyptian hieroglyphs.

Napoleon Bonaparte 15 August 1769 – 5 May 1821), was a French statesman and military leader who became notorious as an artillery commander during the French Revolution. He led many successful campaigns during the French Revolutionary Wars and was Emperor of French as Napoleon I from 1804 until 1814 and again briefly in 1815 during the Hundred days. Napoleon dominated European and global affairs for more than a decade while leading France against a series of coalitions during the Napoleaonic Wars. He won many of these wars and a vast majority of his battles, building a large empire that ruled over much of continental Europe before its final collapse in 1815. He is regarded as one of the greatest military commanders in history, and his wars and campaigns are studied at military schools worldwide. Napoleon's political and cultural legacy has made him one of the most celebrated and controversial leaders in human history.

The first neolithic villages in Egypt came into being at about 6000 B.C.E. The beginning of agriculture in Egypt coincides with the same time. The first crops grown in these villages were wheat and barley.

The valley of Huang He river is considered to be the region of origin of the Chinese culture. Chinese culture evolved here. Agriculture in the neolithic villages of China began at about 7000 B.C.E. Wheat, foxtail millet, and rice were grown by the farmers in these villages. The earliest civilization in China settled on the banks of the Huang He. Ever since the river has been a source of life and death (in the form of new soil and floods). The river has flooded so often that is has become known as the River of Sorrow. Possibly the worst flood in written history occurred in 1931. Between July and November of that year, the river overflowed its banks, flooding about 34,000 square miles of land completely and about 8,000 square miles partially. Entire villages and huge amounts of agriculture and farmland were washed away. About 80 million people were left homeless. Nearly 1 million people died in the flood itself and in the famines and epidemics that resulted from the flooding. The cause of the floods is the large amount of fine-grained Loess carried by the river from the Loess Plateau, which is continuously deposited along the bottom of its channel. The sedimentation causes natural dams to slowly accumulate. These subaqueous dams were unpredictable and generally undetectable. Eventually, the enormous amount of water has to find a new way to the sea, forcing it to take the path of least resistance. When this happens, it bursts out across the flat North China Plain, sometimes taking a new channel and inundating any farmland, cities, or towns in its path

On 9 June 1938, during the Second Sino-Japanese War, Nationalist troops under Chiang Kai Shek broke the levees holding back the river near the village of Huayuankou Henan, causing what has been called by Canadian historian, Diana Lary, a "war-induced natural disaster". The goal of the operation was to stop the advancing Japanese troops by following a strategy of "using water as a substitute for soldiers"

4. The Valleys of Sindhu (Indus) and Saraswati - Indian Subcontinent:

The region of the valleys of Sindhu and Saraswati is now divided between India and Pakistan. The archaeological excavations at Harappa on the banks of Ravi in Punjab and Mohenjo Daro on the banks of Sindhu in Sindh indicate the existence of a fully developed civilization in the Indian subcontinent which was dated to circa 3000 B.C.E. A number of archaeological sites of neolithic villages have been now discovered. It proves that there were well-settled villages in the Indian subcontinent as early as 8000 B.C.E. There is a general consensus among the scholars that the Harappan cities evolved from these early villages. Barley was the main crop grown by the farmers in these villages. However, wheat was also grown on a smaller scale. The farmers in these villages were the first farmers of the Indian subcontinent. They kept cattle and goat-sheep. They lived in mud houses. The archaeological site at Mehrgarh in Baluchistan has yielded evidence of the continuous human occupation from the neolithic times to the rise of Harappan civilisation and the material culture of the respective periods.

In the latter half of the neolithic age, pottery-making had become an art that required special skills.

‘Yellow River’ is the English translation of the Chinese name ______.

The neolithic people at Gilgal had systematically planted ______ trees.

‘Huang He’ river is considered to be the mother of the Chinese culture.

There were radical changes in the way of human life during the neolithic age.

Observe the map and answer the following question based on it. 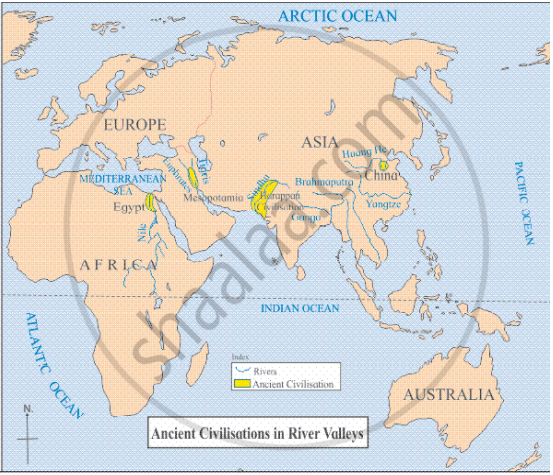 What is the name of the sea at the north of the African continent?