Magnetic Field Due to Current in a Loop (Or Circular Coil)

MAGNETIC FIELD DUE TO A CURRENT THROUGH A CIRCULAR LOOP:- 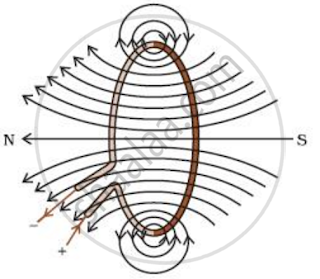 -Suppose this straight wire is bent in the form of a circular loop and a current is passed through it.

-By the time we reach at the centre of the circular loop, the arcs of these big circles would appear as straight lines. Every point on the wire carrying current would give rise to the magnetic field appearing as straight lines at the center of the loop. By applying the right hand rule, it is easy to check that every section of the wire contributes to the magnetic field lines in the same direction within the loop.

to keep track of your progress.
Magnetic Effects of Current part 6 (Circular loop) [00:07:48]
S
to track your progress

Which of the statement given below correctly describes the magnetic field near a long, straight current carrying conductor?