Earth has formed some 4.6 billion years ago. Life on earth exists within a complex structure called the biosphere. There exist many mysteries and wonders in the living world. The extraordinary habitats in which we find living organisms, be it cold mountains, deciduous forests, oceans, freshwater lakes, deserts, or hot springs, leave us speechless. The beauty of a galloping horse, of the migrating birds, the valley of flowers, or the attacking shark evokes awe and a deep sense of wonder. The ecological conflict and cooperation among members of a population and among populations of a community or even the molecular traffic inside a cell make us deeply reflect on – what
indeed is life? This question has two implicit questions within it. The first is a technical one and seeks an answer to what living is as opposed to non-living, and the second is a philosophical one and seeks an answer to what the purpose of life is. As scientists, we shall not attempt to answer the second question. We will try to reflect on – what is living?

When we try to define ‘living’, we conventionally look for distinctive characteristics exhibited by living organisms. Growth, reproduction, ability to sense the environment and mount a suitable response come to our mind immediately as unique features of living organisms. One can add a few more features like metabolism, ability to self-replicate, self-organize, interact, and emergence to this list. Growth is an intrinsic property of all living organisms through which they can increase cells both in number and mass. Unicellular and multicellular organisms grow by cell division. In plants, growth is indefinite and occurs throughout their life. In animals, growth is definite and occurs for some period. Growth in non-living objects is extrinsic. Mountains, boulders, and sand mounds grow by simple aggregation of material on the surface. Living cells grow by the addition of new protoplasm within the cells. Therefore, growth in living thing is intrinsic. In unicellular organisms like Bacteria and Amoeba growth occurs by cell division and such cell division also leads to the growth of their population. Hence, growth and reproduction are mutually inclusive events.

All living organisms are made up of cells which may be prokaryotic or eukaryotic. Prokaryotes are unicellular, lack membrane bound nuclei and organelles like mitochondria, endoplasmic reticulum, Golgi bodies, and so on (Example: Bacteria and Blue-green algae). In Eukaryotes a definite nucleus and membrane bound organelles are present. Eukaryotes may be unicellular (Amoeba) or multicellular (Oedogonium).

All organisms are capable of sensing their environment and respond to various physical, chemical, and biological stimuli. Animals sense their surroundings by sense organs. This is called Consciousness. Plants also respond to the stimuli. Bending of plants towards sunlight, the closure of leaves in touch-me-not plant to touch are some examples for response to stimuli in plants. This type of response is called Irritability.

Property of self-regulation and tendency to maintain a steady-state within an external environment that is liable to change is called Homeostasis. It is essential for the living organism to maintain internal conditions to survive in the environment.

The sum of all the chemical reactions taking place in a cell of a living organism is called metabolism. It is broadly divided into anabolism and catabolism.

Movement, Nutrition, Respiration, and Excretion are also considered as the property of living things. The levels of organization in living organisms begin with atoms and end in the Biosphere. Each level cannot exist in isolation instead they form levels of integration as given below. 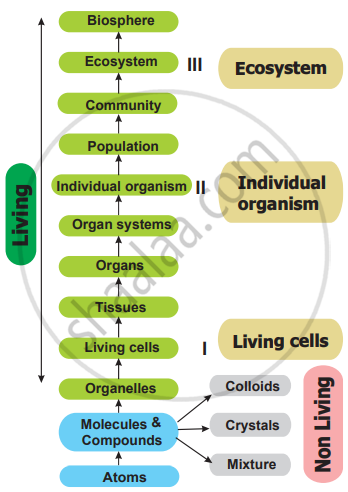 to keep track of your progress.
The Living World - Living & It's Characteristics [00:07:34]
S
to track your progress