This law was first proposed by Prof. Gossen but was discussed in detail by Prof. Alfred Marshall in his book ‘Principles of Economics’ published in 1890.
The law of diminishing marginal utility is universal in character.

Law of diminishing marginal utility was first formulated by Herman Gossen (1854) who stated:
“The magnitude of one and the same satisfaction, when we continue to enjoy it without interruption continually decreases until satisfaction is reached.”

Marshall (1920, 1961) continued this line of thinking, giving a more technical definition. He stated that the additional benefit which a person derives from a given increase of his stock of a thing diminishes with every increase in the stock that he already has.

Statement of the Law :

According to Prof. Alfred Marshall, “Other things remaining constant, the additional benefit which a person derives from a given increase in his stock of a thing, diminishes with every increase in the stock that he already has.”
In other words, marginal utility that any consumer derives from successive units of a particular commodity goes on diminishing as his or her total consumption of that commodity increases. In short, the more of a thing you have, the less you want to have more of it.

Some uses of diminishing marginal utility:

Table below explains the Law of Diminishing Marginal Utility. 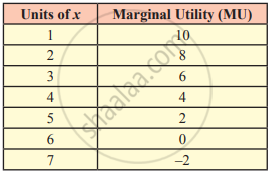 The table shows that marginal utility keeps on diminishing with increase in consumption, further it becomes zero and then negative.

Explanation of the Diagram :

In the above diagram, units of commodity x are measured on X axis and marginal utility is measured on Y axis. Various points of MU are plotted on the graph as per the given schedule. When the locus of all the points is joined, MU
curve is derived.

Criticisms to the law of diminishing marginal utility:

As per the law of diminishing marginal utility, the measurement of utility is assumed to be _____.

Observe the given table and answer the question:

Observe the given table and answer the question: