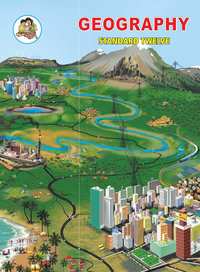 A: Settlements can be of various types.

A: When cities grow, their functions also grow.

R: Cities can have only one function.

In rural settlements, land use is related to agriculture.

Rural-urban fringes have the characteristics of both urban and rural settlements.

Growth of urban areas is linked to land use.

The interrelationship between rural and urban settlements.

Explain the characteristics of rural settlements.

What factors are responsible for the development of various patterns in the settlement? Give examples.

Land use and Landcover

Draw a neat and well-labelled diagram for:

Write a note in your own words about how land use in Lonar city has evolved over time. Read the given passage and answer the following questions:

1) Which human settlements are mentioned in the passage above?
2) On what basis are urban and rural areas classified?
3) What are the functions carried out in rural settlements?
4) Explain the difference between low-order service and high-order service settlements.

Using Balbharati 12th Board Exam solutions Human Settlements and Land Use exercise by students are an easy way to prepare for the exams, as they involve solutions arranged chapter-wise also page wise. The questions involved in Balbharati Solutions are important questions that can be asked in the final exam. Maximum students of Maharashtra State Board 12th Board Exam prefer Balbharati Textbook Solutions to score more in exam.

Get the free view of chapter 3 Human Settlements and Land Use 12th Board Exam extra questions for Geography 12th Standard HSC Maharashtra State Board and can use Shaalaa.com to keep it handy for your exam preparation