State Newton’S Third Law of Motion and Give Two Examples to Illustrate the Law. - Science

State Newton’s third law of motion and give two examples to illustrate the law. 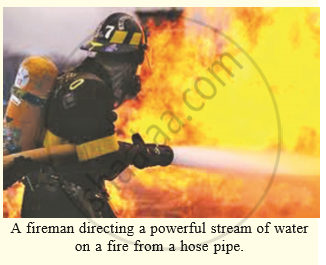 According to Newton’s third law of motion, whenever one body exerts a force on another body, the second body exerts an equal and opposite force on the first body.

Examples:
(i) Jet airplanes utilize the principle of action and reaction. In the modern jet aircraft, the hot gases obtained by the rapid burning of fuel rush out of a jet from the rear end of the aircraft at a great speed. The equal and opposite reaction of the backward-heading gases pushes the aircraft forward at a great speed.