The role of the State towards its citizens:

In the private sector, POSDCORB is an acronym which means Planning, Organizing, Staffing, Directing, Coordinating, Reporting and Budgeting which was first coined in a paper on administrative management that was written for the Brownlow Committee by Luther Gulick and Lyndall Urwick. POSDCORB can be used as a systematic framework for efficiently executing business processes in a company or by an individual.

It is one of the most essential aspects of good governance. Effective functioning of any democratic system requires people’s participation. It ensures that voices and choices of people are heard. People get an opportunity to participate in the process of decision making and its implementation.

The supremacy of the law of the land i.e. constitution, is another core value of good governance. The constitutional values are the guiding posts for the administration. All are treated equally in front of the law. It ensures a just and fair polity where rights of the people are safeguarded.

India, also known as Bharat, is a Union of States. It is a Sovereign Socialist Secular Democratic Republic with a parliamentary system of government. The Republic is governed in terms of the Constitution of India which was adopted by the Constituent Assembly on 26th November, 1949 and came into force on 26th January, 1950. The Constitution provides for a Parliamentary form of government which is federal in structure with certain unitary features. The constitutional head of the Executive of the Union is the President. As per Article 79 of the Constitution of India, the council of the Parliament of the Union consists of the President and two Houses known as the Council of States (Rajya Sabha) and the House of the People (Lok Sabha). Article 74(1) of the Constitution provides that there shall be a Council of Ministers with the Prime Minister as its head to aid and advise the President, who shall exercise his/her functions in accordance to the advice. The real executive power is thus vested in the Council of Ministers with the Prime Minister as its head.

The culture of secrecy has been challenged by the value of transparency. This enables the people to keep the government under public scrutiny. In India since 2005 the Right to Information Act has been giving the citizens the right to seek information related to the functioning of the government.

Good governance requires that institutions and processes try to serve all stakeholders within a reasonable timeframe. The government is prompt in taking decisions and specially pays heed to the problems and designs the policies accordingly.

There are several view- points in a given society. Good governance requires a dialogue between various segments of the society. This can help to reach a broad consensus on what is in the best interest of the whole community and how this can be achieved. It also requires a broad and long-term perspective on what is needed for sustainable human development and how to achieve the goals of such development.

The Sustainable Development Goals (SDGs) were adopted in September 2015 as a part of the resolution, ‘Transforming our world: the 2030 Agenda for Sustainable Development’. India is committed to achieve the 17 SDGs and the 169 associated targets, which comprehensively cover social, economic and environmental dimensions of development and focus on ending poverty in all its forms and dimensions. At the Central Government level, NITI Aayog has been assigned the role of overseeing the implementation of SDGs in the country.

To spread awareness about the Goals, bring together stakeholders and build capacities for the realization of SDGs, NITI Aayog has organized several national and regional level consultations

A society’s well-being depends on ensuring that all its members feel that they have a stake in it. No one should feel excluded from the mainstream of society. This requires all groups, but particularly the most vulnerable, have opportunities to improve or maintain their well-being.

Good governance means that processes and institutions produce results that meet the needs of society while making the best use of resources at their disposal. The concept of efficiency in the context of good governance also covers the sustainable use of natural resources and the protection of the environment.

State whether the following statement is true or false with reason.

Good Governance aims at the efficient use of natural resources.

Explain the co-relation between the following.

Answer the following question in detail with help of a given point.

Explain in detail the following values of Good Governance.

Compete for the concept map. 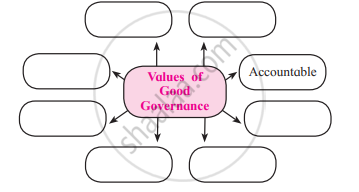