Chapter 1: Nature and Significance of Management 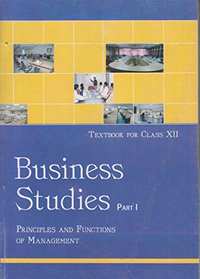 what makes principles of management flexible ?

Name the principle that is an extension of the "harmony, not discord".

State any two causes of fatigue that may create hindrance in the employee’s performance.

SanakLal and Gagan started their career in Wales Limited (a printing press) after going through a rigorous recruitment process. Since they had no prior work experience, the firm decided to give them one year to prove themselves. Name the principle of management followed by Wales Limited.

Which technique is used by Taylor for distinguishing efficient and inefficient workers?

How is the Principle of ‘Unity of Command’ useful to management? Explain briefly.

Define scientific management. State any three of its principles.

If an organisation does not provide the right place for physical and human resources in an organisation, which principle is violated? What are the consequences of it?

Answer the following question.
Explain any four points regarding the significance of the principles of management.

Explain the principle of ‘Scalar Chain’ and gang plank.

A production manager at top level in a reputed corporate, Mr. Rathore holds the responsibility for ordering raw material for the firm. While deciding on the supplier for the financial year 2017-18, he gave the order to his cousin at
a higher price per unit instead of the firm’s usual supplier who was willing to lower the rates for the order. Which principle of management was violated by Mr. Rathore? What are the positive impacts of following the above identified principle?

Explain the Principles of Scientific management given by Taylor.

Explain the following Principles of management given by Fayol with examples:
a. Unity of direction
b. Equity
c. Espirit de corps
d. Order
e. Centralisation and decentralization
f. Initiative

Explain the technique of ‘Functional Foremanship’ and the concept of ‘Mental Revolution’ as enunciated by Taylor.

Discuss the differences between the contributions of Taylor and Fayol.

Discuss the relevance of Taylor and Fayol’s contribution in the contemporary business environment.

Bhasin’ limited was engaged in the business of food processing and selling its products under a popular brand. Lately the business was expanding due to good quality and reasonable prices. Also with more people working the market for processed food was increasing. New players were
also coming to cash in on the new trend. In order to keep its market share in the short run the company directed its existing workforce to work overtime. But this resulted in many problems. Due to increased pressure of work the efficiency of the workers declined. Sometimes the subordinates had
to work for more than one superior resulting in declining efficiency. The divisions that were previously working on one product were also made to work on two or more products. This resulted in a lot of overlapping and wastage. The workers were becoming indisciplined. The spirit of teamwork, which
had characterized the company, previously was beginning to wane. Workers were feeling cheated and initiative was declining. The quality of the products was beginning to decline and market share was on the verge of decrease. Actually the company had implemented changes without creating the required infrastructure.

a. Identify the Principles of Management (out of 14 given by Henry Fayol) that were being violated by the company.

b. Explain these principles in brief.

c. What steps should the company management take in
relation to the above principles to restore the company
to its past glory?

(Further information related to the above question 6) The management of company Bhasin Limited now realised its folly. In order to rectify the situation it appointed a management consultant -Mukti Consultants - to recommend a restructure plan to bring the company back on the rails. Mukti Consultants undertook a study of the production= process at the plant of the company Bhasin Limited and recommended the following changes —
• The company should introduce scientific management with regard to production.
• Production Planning including routing, scheduling, dispatching and feedback should be implemented.
• In order to separate planning from operational management ’Functional foremanship’ should be
introduced.
• ‘Work study’ should be undertaken to optimise the use of resources.
• ‘Standardisation’ of all activities should be implemented to increase efficiency and accountability.
• To motivate the workers ‘Differential Piece Rate System’ should be implemented.
(The above changes should be introduced apart from the steps recommended as an answer to Part c - case problem 6 above.)

Using NCERT Class 12 solutions Principles of Management exercise by students are an easy way to prepare for the exams, as they involve solutions arranged chapter-wise also page wise. The questions involved in NCERT Solutions are important questions that can be asked in the final exam. Maximum students of CBSE Class 12 prefer NCERT Textbook Solutions to score more in exam.