Based on the following points write a story. - English

Based on the following points write a story. 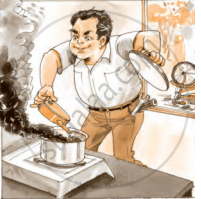 Begin like this: Last month my aunt decided to visit her parents...

Last month my aunt decided to visit her parents. They live in some other city. In absence of my aunt my uncle had to do all the cooking. He is very forgetful and absent-minded. One day he puts vegetable on stove for cooking and at the same time he goes out to clean his bicycle.
My uncle got involved in cleaning his bicycle so much that he completely forgot about the vegetables he had kept on the stove. One of his neighbour came to his place hurriedly telling about some burning smell coming from his kitchen. My uncle remembered about the vegetables he had kept on stove for cooking.
He rushed to the kitchen and to save them from getting burnt he poured some oil over them immediately. Only at the time of eating he realised it was not cooking oil but machine oil. The vegetables were completely spoiled, my uncle had to throw them away.

Concept: Reading
Is there an error in this question or solution?
Chapter 5.1: Quality - Writing [Page 82]
Q 1 Q 4Q 1
Advertisement Remove all ads