What is Projectile?
Projectile is any object thrown into the space upon which the only acting force is the gravity. In other words, the primary force acting on a projectile is gravity. This doesn’t necessarily mean that the other forces do not act on it, just that their effect is minimal compared to gravity. The path followed by a projectile is known as trajectory. A baseball batted or thrown and the instant the bullet exits the barrel of a gun are all examples of projectile. For finding different parameters related to projectile motion, we can make use of different equations of motions:

Maximum Height:
It is the highest point of the trajectory (point A). When the ball is at point A, the vertical component of the velocity will be zero. i.e. 0 = (u sin θ)2 – 2g Hmax [s = Hmax, v = 0 and u = u sin θ]
Therefore in a projectile motion the Maximum Height is given by (Hmax):

A Few Projectile Motion Examples :-
We know that projectile motion is a type of two-dimensional motion or motion in a plane. It is assumed that the only force acting on a projectile (the object experiencing projectile motion) is the force due to gravity. But how can we define projectile motion in the real world? How are the concepts of projectile motion applicable to daily life? Let us see some real-life examples of projectile motion in two dimensions.
All of us know about basketball. To score a basket, the player jumps a little and throws the ball in the basket. The motion of the ball is in the form of a projectile. Hence it is referred to as projectile motion. What advantage does jumping give to their chances of scoring a basket? Now apart from basketballs, if we throw a cricket ball, a stone in a river, a javelin throw, an angry bird, a football or a bullet, all these motions have one thing in common. They all show a projectile motion. And that is, the moment they are released, there is only one force acting on them- the gravity. It pulls them downwards, thus giving all of them an equal impartial acceleration of.
It implies that if something is being thrown in the air, it can easily be predicted how long the projectile will be in the air and at what distance from the initial point it will hit the ground. If the air resistance is neglected, there would be no acceleration in the horizontal direction. This implies that as long as a body is thrown near the surface, the motion of the body can be considered as a two-dimensional motion, with acceleration only in one direction. But how can it be concluded that a body thrown in air follows a two-dimensional path? To understand this, let us assume a ball that is rolling as shown below: 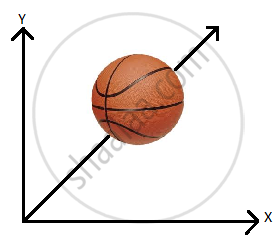 Now, if the ball is rolled along the path shown, what can we say about the dimension of motion? The most common answer would be that it has an x-component and a y-component, it is moving on a plane, so it must be an example of motion in two dimensions. But it is not correct, as it can be noticed that there exists a line which can completely define the motion of the basketball. Thus, it is an example of motion in one dimension. Therefore, the choice of axis does not alter the nature of the motion itself.|

Now, if the ball is thrown at some angle as shown, the velocity of the ball has an x-component and component and also a z-component. So, does it mean that it is a three-dimensional motion? It can be seen here that a line cannot define such a motion, but a plane can. Therefore, for a body thrown at any angle, there exists a plane that entirely contains the motion of that body. Thus, it can be concluded that as long as a body is near the surface of the Earth and the air resistance can be neglected, then irrespective of the angle of projection, it will be a two-dimensional motion, no matter how the axes are chosen. If the axes here are rotated in such a way that, then and can completely define the motion of the ball as shown below: 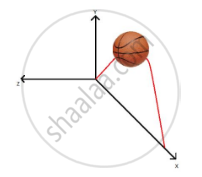 Thus, it can be concluded that the minimum number of coordinates required to completely define the motion of a body determines the dimension of its motion.

A cricketer can throw a ball to a maximum horizontal distance of 100 m. How much high above the ground can the cricketer throw the same ball?

Where the symbols have their usual meaning

A man can swim with a speed of 4.0 km/h in still water. How long does he take to cross a river 1.0 km wide if the river flows steadily at 3.0 km/h and he makes his strokes normal to the river current? How far down the river does he go when he reaches the other bank?

A bullet fired at an angle of 30° with the horizontal hits the ground 3.0 km away. By adjusting its angle of projection, can one hope to hit a target 5.0 km away? Assume the muzzle speed to the fixed, and neglect air resistance.

The ceiling of a long hall is 25 m high. What is the maximum horizontal distance that a ball thrown with a speed of 40 m s–1 can go without hitting the ceiling of the hall?

Two particles are projected in air with speed vo at angles θ1 and θ2 (both acute) to the horizontal, respectively. If the height reached by the first particle is greater than that of the second, then tick the right choices