Write the type of C++ token (keywords) and the User-defined identifier from the following.

The following C++ code during compilation reports errors as follows:

Write the names of the correct header files, which must be included  to compile the code successfully

Note: Assume all required header files are already included in the program.

Note: Assume all required header files are already included in the program

Note: Assume all required header files are already included in the program:

Look at the following C++ code and find the possible output from the options (i) to (iv) following it. Also, write the highest and lowest values that can be assigned to the array A.

Observe the following C++ code and answer the questions (i) and (ii).

1) Which Objected Programming features is illustrated by the definition of classes FIRST and SECOND?

Write the definition of a class CONTAINER in C++ with the following description.

// volume as per the Type

- GetValues ()    //A function to allow a user to enter of Radius, Height and Type. Also, call function CalVolume() from it.

- ShowAll ()      // A function to display Radius, Height, Type and Volume of Container

Answer the question (i)  to (iv) based on the following:

1) Which type of Inheritance out of the following is illustrated in the above example?

2) Write the name of all the member which are directly accessible by the member function View() of Class Schedule.

3) Write the names of all the members, which are directly accessible by the object S of Class Schedule declared in the main() function.

4) What will be the order of execution of the constructors, when the object S of the Class Schedule Schedule is declared inside the main() function?

Write the definition of a function SumEO(int VALUES[], int N) in C++, which should display the 4 sum of even value and sum of odd values of the array separately.

Example: If the array VALUES contains

Then the functions should display the output as:

Write a definition for a function UpperHalf(int Mat[4][4]) in C++ which displays the elements in the same way as per the example is shown below.

For example, if the content of the array Mat is as follows:

Thew function should display the content in the following format: 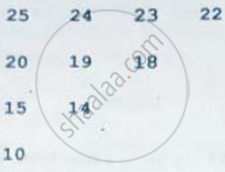 Wnte the definition of a member function AddPac ket() for a class QUEUE in C++, to remove/delete a Packet from a dynamically allocated QUEUE of Packets' considering the following code is already written as a part of the program.

Convert the following Infix expression to its equivalent Postfix expression. showing the stack contents for each step of conversion

A text file named MATTER.TXT contains some text which needs to be displayed such that every next character is separated by a symbol '#'.

Write a function definition for HashDisplay() in C++ that would display the entire content of the file MATTER.TXT in the desired format:

if the file Matter.TXT has the following content stored in it:

THE WORLD IS ROUND

Write a definition for a function TotalTeachers( ) in C++ to read each object of a binary file SCHOOLS.DAT, find the total number teachers, whose data is stored in the file and display the same. Assume that the file SCHOOLS.DAT is created with the help objects of class SCHOOLS, which is defined below :

Find the output of the following C++ code considering that the binary file SCHOOL.DAT exists on the hard disk with the following records of 10 schools of the class SCHOOLS as declared in the previous question(4 b)

Observe the following tables VIDEO and MEMBER carefully and write the name of the RDBMS operation out of (i) SELECTION (ii) PROJECTION (iii) UNION (iv) CARTESIAN PRODUCT, which has been used to produce the output as shown below. Also, find the
Degree and Cardinality of the final result.

Write SQL queries for (i) to (iv) and find outputs for SQL queries (v) to (viii) which are based on the table.

1) To display details of all transaction of TYPE Depos1t from Table TRANSACT.

2) To display the ANO and AMOUNT of all Depos1ts and Withdrawals done in the month of October 2017 from table TRANSACT.

4) To display all ANO, ANAME and DOT of those persons from tables ACCOUNT and TRANSACT who have done transactions less than or equal to 3000?

5) SELECT ANO, ANAME FROM ACCOUNT WHERE ADDRESS NOT IN ('CHENNAI', 'BANGALORE');

State any one Absorption Law of Boolean Algebra and verily it using truth table.

Draw the Logic Circuit of the following Boolean Expression

How CBSE Class 12 Question Paper solutions Help Students ?
• Question paper solutions for Computer Science (C++) will helps students to prepare for exam.
• Question paper with answer will boost students confidence in exam time and also give you an idea About the important questions and topics to be prepared for the board exam.
• For finding solution of question papers no need to refer so multiple sources like textbook or guides.
Advertisement Remove all ads