With the Help of a Suitable Labelled Diagram, Describe the Structure of a Dicot Seed. - Biology

With the help of a suitable labelled diagram, describe the structure of a dicot seed. 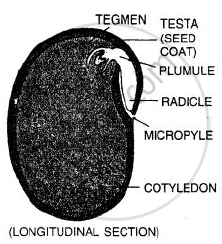 It is a dicotyledonous and non-endospermic seed. It is produced in a long cylindrical pod (fruit – phali) External characters. The seed is brown or whitish brown in colour. The seed is hard and smooth and kidney-shaped i.e. Convex on one side and concave on the other side. The concave side bears whitish scar called hilum. It is the place which is attached to the wall of the pod through a stalk called funicle. At one side of the hilum is a small pore called micropyle water enters through it.

Concept: Classification and Structure of Seeds - Dicot Seed Structure (Bean Seed)
Is there an error in this question or solution?
Chapter 2: The Flower - Long Answer Questions
Q 4 Q 3Q 5
Advertisement Remove all ads