Explain the pollination process in Salvia

Pollination in Salvia - Insects bring about pollination in Salvia. Flowers of Salvia have corolla whose upper part is blipped and Iower part is tubular where two stamens are attached. Upper lip forms a hood like structure while lower lip serves as a landing platform for insects. Of the two stamens, the fertile one is situated under the hood like upper lip of corolla. When an insect sits on the lower lip and pushes its proboscis into the corolla tube for collecting nectar, its back touches the fertile anther, which gets dusted with pollen grains. When this insect visits another flower for nectar, the style bends down and touches the back of the insect, as a result pollination occurs. 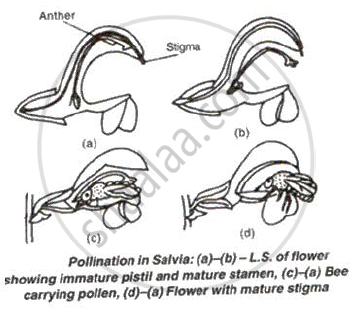 Concept: Fertilization in Plants
Is there an error in this question or solution?
Chapter 8: Pollination and Fertilization - Exercise [Page 72]
Q 5.2 Q 5.1Q 6
Advertisement Remove all ads