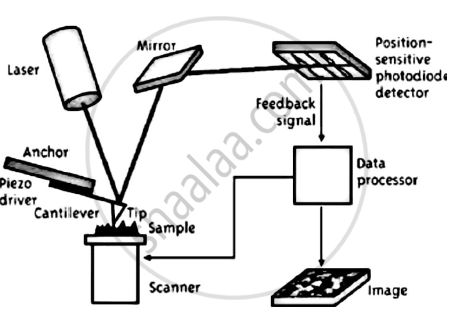 1.AFM consists of microscope cantilever with a sharp tip (probe) at its end used to scan the specimen surface.

2.The cantilever is typically silicon or silicon nitride with the tip radius of curvature of the orders of nm. Basically, AFM is modified TEM in which limitations of TEM is overcomed. When the tip is bought close to the sample, force between the tip and sample leads to the deflection of the cantilever according to the Hook`s law. Instead of using an electrical signal, the AFM relies on forces between the atom on the tip and in the sample.

4.A LASER beam is used to have a record of vertical movement of the needle. This information is later converted into visible from using photo diode. Depending upon the situation, AFM measures different types of forces like a Vander Waal’s forces, capillary force, mechanical contact force etc.