Draw the block diagram of cathode ray tube and briefly explain its parts. 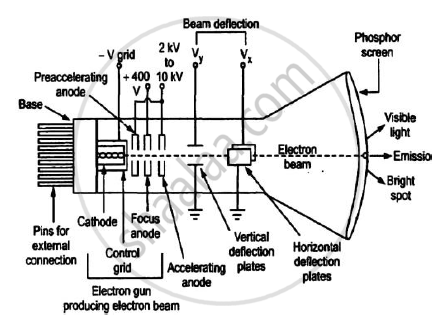 The main parts of the CRT are

1.The electron gun section of the cathode ray tube provides a sharply focused, electron beam directed towards the fluorescent-coated screen.

2.This section starts from thermally heated cathode, emitting the electrons.

3.The control grid is given negative potential with respect to cathode.

4.This grid controls the number of electrons in t beam, going to the screen.

5.The light emitted is usually of the green colour.

When the electron beam is accelerated it passes through the deflection system, with which beam can be positioned anywhere on the screen.

1.The light produced by the screen does not disappear immediately when bombardment by electrons ceases, i.e., when the signal becomes zero.

2.The time period for which the trace remains on the screen after the signal becomes zero is known as “persistence or fluorescence” .

3.The persistence may be as short as a few microsecond, or as long as tens of seconds or even minutes.

1.All the components of a CRT are enclosed in an evacuated glass tube called envelope.

2.This allows the emitted electrons to move about freely from one end of the tube to the other end.

The base is provided to the CRT through which the connections are made to the various parts.