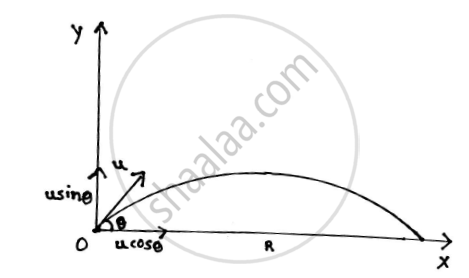 In the horizontal direction,the projectile moves with a constant velocity.

Horizontal component of initial velocity u is u.cosθ

In the vertical motion,the projectile moves under gravity and hence this is an accelerated motion.

This is the equation of the projectile

This equation is also the equation of a parabola

Thus, proved that path traced by a projectile is a parabolic curve.

Concept: Velocity and Acceleration in Terms of Rectangular Co-ordinate System
Is there an error in this question or solution?
2017-2018 (December) CBCGS
Q 6.b Q 6.aQ 6.c
Advertisement Remove all ads