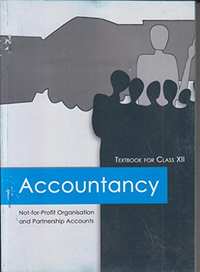 What are the different ways in which a partner can retire from the firm?

Write the various matters that need adjustments at the time of retirement of partner/partners.

Why do firm revaluate assets and reassess their liabilities on retirement or on the event of death of a partner?

Why a retiring/deceased partner is entitled to a share of goodwill of the firm?

Explain the modes of payment to a retiring partner.

How will you compute the amount payable to a deceased partner?

Explain the treatment of goodwill at the time of retirement or on the event of death of a partner?

Discuss the various methods of computing the share in profits in the event of death of a partner.

Sangeeta, Saroj and Shanti are partners sharing profits in the ratio of 2:3:5. Goodwill is appearing in the books at a value of Rs 60,000. Sangeeta retires and goodwill is valued at Rs 90,000. Saroj and Shanti decided to share future profits equally. Record necessary Journal entries.

Record the necessary journal entries to the above effect and prepare the Revaluation Account.

Naresh, Raj Kumar and Bishwajeet are equal partners. Raj Kumar decides to retire. On the date of his retirement, the Balance Sheet of the firm showed the following: General Reserves Rs 36,000 and Profit and Loss Account (Dr.) Rs 15,000.
Pass the necessary journal entries to the above effect.

Digvijay, Brijesh and Parakaram were partners in a firm sharing profits in the ratio of 2:2:1. Their Balance Sheet as on March 31, 2017 was as follows:

Brijesh retired on March 31, 2017 on the following terms:
(i) Goodwill of the firm was valued at Rs 70,000 and was not to appear in the books.
(ii)  Bad debts amounting to Rs 2,000 were to be written off.
(iii)  Patents were considered as valueless.
Prepare Revaluation Account, Partners’ Capital Accounts and the Balance Sheet of Digvijay and Parakaram after Brijesh’s retirement.

Radha, Sheela and Meena were in partnership sharing profits and losses in the proportion of 3:2:1. On April 1, 2017, Sheela retires from the firm. On that date, their Balance Sheet was as follows:

Prepare:
1. Revaluation account
2. Partner’s capital accounts and
3. Balance sheet of the firm after retirement of Sheela.

Pankaj, Naresh and Saurabh are partners sharing profits in the ratio of 3:2:1. Naresh retired from the firm due to his illness. On that date the Balance Sheet of the firm was as follows:

Books of Pankaj, Naresh and Saurabh
Balance Sheet as on March 31, 2017

Additional Information:
(i) Premises have appreciated by 20%, stock depreciated by 10% and provision for doubtful debts was to be made 5% on debtors. Further, provision for legal damages is to be made for Rs 1,200 and furniture to be brought up to Rs 45,000.
(ii) Goodwill of the firm be valued at Rs 42,000.
(iii) Rs 26,000 from Naresh’s Capital account be transferred to his loan account and balance be paid through bank; if required, necessary loan may be obtained from Bank.
(iv) New profit sharing ratio of Pankaj and Saurabh is decided to be 5:1.
Give the necessary ledger accounts and balance sheet of the firm after Naresh’s retirement.

Puneet, Pankaj and Pammy are partners in a business sharing profits and losses in the ratio of 2:2:1 respectively. Their balance sheet as on March 31, 2017 was as follows:

Books of Puneet, Pankaj and Pammy
Balance Sheet as on March 31, 2017

Following is the Balance Sheet of Prateek, Rockey and Kushal as on March 31, 2017.

Books of Prateek, Rockey and Kushal
Balance Sheet as on March 31, 2017

Rockey died on June 30, 2017. Under the terms of the partnership deed, the executors of a deceased partner were entitled to:

a) Amount standing to the credit of the Partner’s Capital account.
b) Interest on capital at 5% per annum.
c) Share of goodwill on the basis of twice the average of the past three years’ profit and
d) Share of profit from the closing date of the last financial year to the date of death on the basis of last year’s profit.

Narang, Suri and Bajaj are partners in a firm sharing profits and losses in proportion of 1/2 , 1/6 and 1/3 respectively. The Balance Sheet on April 1, 2015 was as follows:

Books of Suri, Narang and Bajaj
Balance Sheet as on April 1, 2015

Bajaj retires from the business and the partners agree to the following:
a) Freehold premises and stock are to be appreciated by 20% and 15% respectively.
b) Machinery and furniture are to be depreciated by 10% and 7% respectively.
c) Bad Debts reserve is to be increased to Rs 1,500.
d) Goodwill is valued at Rs 21,000 on Bajaj’s retirement.
e) The continuing partners have decided to adjust their capitals in their new profit sharing ratio after retirement of Bajaj. Surplus/deficit, if any, in their capital accounts will be adjusted through current accounts.
Prepare necessary ledger accounts and draw the Balance Sheet of the reconstituted firm.

Pramod retired on the date of Balance Sheet and the following adjustments were made:
a) Stock was valued at 10% less than the book value.
b) Factory buildings were appreciated by 12%.
c) Reserve for doubtful debtsbecreated up to 5%.
d) Reserve for legal charges to be made at Rs 265.
e) The goodwill of the firmbefixed at Rs 10,000.
f) The capital of the new firmbefixed at Rs 30,000. The continuing partners decide to keep their capitals in the new profit sharing ratio of 3:2.
Pass journal entries and prepare the balance sheet of the reconstituted firm after transferring the balance in Pramod’s Capital account to his loan account.

The partners have been sharing profits in the ratio of 5:3:2. Malik decides to retire from business on April 1, 2016 and his share in the business is to be calculated as per the following terms of revaluation of assets and liabilities : Stock, Rs 20,000; Office furniture, Rs 14,250; Plant and Machinery Rs 23,530; Land and Building Rs 20,000.
A provision of Rs 1,700 to be created for doubtful debts. The goodwill of the firm is valued at Rs 9,000.
The continuing partners agreed to pay Rs 16,500 as cash on retirement of Malik, to be contributed by continuing partners in the ratio of 3:2. The balance in the capital account of Malik will be treated as loan.
Prepare Revaluation account, capital accounts, and Balance Sheet of the reconstituted firm.

Arti, Bharti and Seema are partners sharing profits in the proportion of 3:2:1 and their Balance Sheet as on March 31, 2016 stood as follows:

Bharti died on June 12, 2016 and according to the deed of the said partnership, her executors are entitled to be paid as under:(a) The capital to her credit at the time of her death and interest thereon @ 10% per annum.
(b) Her proportionate share of reserve fund.
(c) Her share of profits for the intervening period will be based on the sales during that period, which were calculated as Rs 1,00,000. The rate of profit during past three years had been 10% on sales.
(d) Goodwill according to her share of profit to be calculated by taking twice the amount of the average profit of the last three years less 20%. The profits of the previous years were:
2013 – Rs 8,200
2014 – Rs 9,000
2015 – Rs 9,800
The investments were sold for Rs 16,200 and her executors were paid out. Pass the necessary journal entries and write the account of the executors of Bharti.

Nithya, Sathya and Mithya were partners sharing profits and losses in the ratio of 5:3:2. Their Balance Sheet as on March 31, 2015 was as follows:

Books of Nithya, Sathya and Mithya
Balance Sheet at March 31, 2015

Record the necessary journal entries to give effect to the above and write the executor’s account till the amount is fully paid. Also prepare the Balance Sheet of Nithya and Sathya as it would appear on August 1, 2015 after giving effect to the adjustments.

NCERT solutions for Class 12 Accountancy - Not-for-profit Organisation and Partnership Accounts chapter 4 (Reconstitution of a Partnership Firm – Retirement/Death of a Partner) include all questions with solution and detail explanation. This will clear students doubts about any question and improve application skills while preparing for board exams. The detailed, step-by-step solutions will help you understand the concepts better and clear your confusions, if any. Shaalaa.com has the CBSE Class 12 Accountancy - Not-for-profit Organisation and Partnership Accounts solutions in a manner that help students grasp basic concepts better and faster.

Using NCERT Class 12 solutions Reconstitution of a Partnership Firm – Retirement/Death of a Partner exercise by students are an easy way to prepare for the exams, as they involve solutions arranged chapter-wise also page wise. The questions involved in NCERT Solutions are important questions that can be asked in the final exam. Maximum students of CBSE Class 12 prefer NCERT Textbook Solutions to score more in exam.

Get the free view of chapter 4 Reconstitution of a Partnership Firm – Retirement/Death of a Partner Class 12 extra questions for Class 12 Accountancy - Not-for-profit Organisation and Partnership Accounts and can use Shaalaa.com to keep it handy for your exam preparation